On a bright but chilly Spring morning over 30 people gathered at the Odd Down Park and Ride for an exploration of these Duchy of Cornwall Woods (permission granted).

We have in the past visited Breach Wood but not Vernham or Middle Wood. Our first stop was in Killkenny Lane, before we had got to the woods, where a neatly trimmed Lonicera hedge gave a good view into the distance. Here Alan explained that virtually everything in sight was Duchy land and in the foreground springs and slippage indicated unsound land due to the presence of clays. We then entered Vernham Wood and carefully walked down a concrete roadway.

We saw how this road had a spout/spring that was the source of the Padley Brook and that the road was cut into the side of a steep bank. At the end of the concrete we found ourselves looking over the metal framework of a mineral transfer site that was the centre of a Fuller’s Earth mine. The mine was the site of a further spring leading to the Padley Brook. Through the trees we could see below some mossy pools but the slippery conditions were risky. This did not deter Marion Rayner who visited the pools and said that the conditions were similar to tufa. 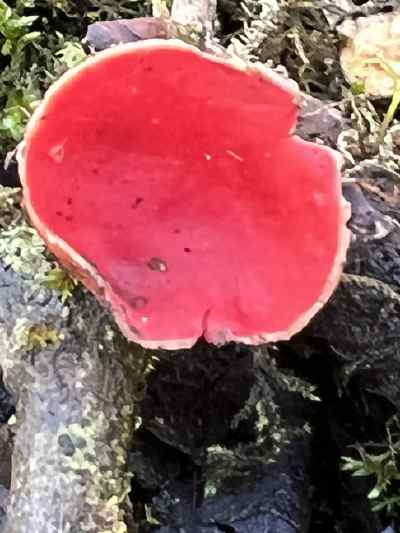 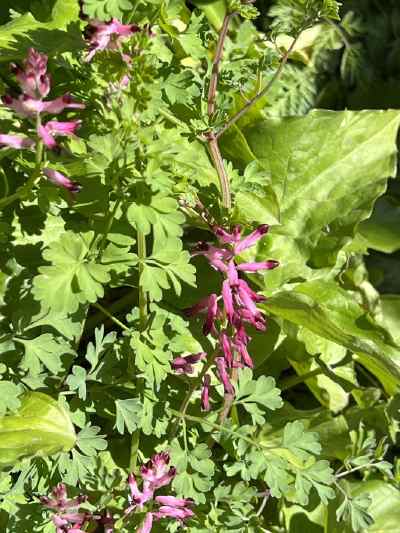 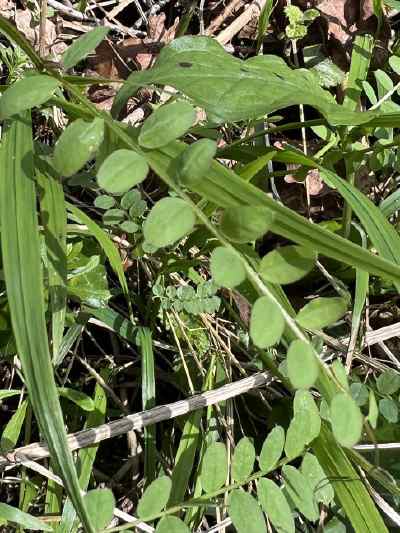 Meanwhile Alan pointed out that the large trees were almost all Ash and of a similar age representing regrowth from the clear felling that occurred here when the mine was in action (between 1915 and 1959). The clear felling was reinforced by the attempted open-cast mine (the clay being much closer to the surface this side of a fault) uphill of the site that failed. The top boundary of the wood is the Wansdyke. A short step down-hill on the concrete path way and we came to the bricked up adit of the mine and Alan explained that the mineral was taken up the concrete way and across the main road to the mine and treatment site in Combe Hay (now the P&R and recycling works). This part of the site was covered in nettles indicating nutrient enrichment, but by what by was a puzzle. A bright scarlet Peziza (Elf cup) was found here. There was clear evidence that the wood was being managed with extensive planting, presumably replacement trees for the Ash which showed signs of die-back.

Returning up the concrete to Killkenny Lane we progressed  between two fields (Broad Beans one side and winter wheat the other) having noted a bright plant of Fumitory (Fumaria) and the cowslips in an old pig field. Alan pointed out the almost complete absence of weeds in the two fields, indicating that they would be useless for wildlife and were like much of the British countryside.

As soon as we entered the downward sloping lane things changed and we had a cheerful flower display or Wood Anemonies, Violets (probably odora but no-one checked,) Primroses and Lesser Celandine. Alan pointed out the leaves of Vicia sylvatica (Wood Vetch) which Rob Randall explained had become common when the Elm disease was rampant but was now much less common and found in the sunlight on the edge of woodland. At the bottom of the hill we entered the wood and after the “yard” we immediately saw that this wood was totally different, being Oak with hazel coppice and covered in British Bluebells (just coming into flower) and, as such, a rarity in the Bath area. 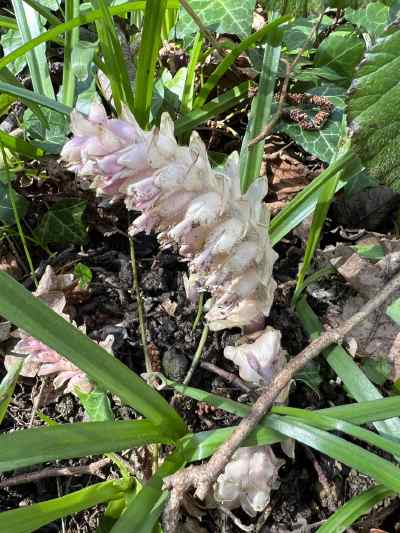 We followed the circular pathway around the wood noting the very large clump of Leucojum (Spring Snowflake) looking like a giant Snowdrop. It is probably an “escape” but obviously, by the size of it, that was some time ago. Alan pointed out the different cutting treatment of the trees, some as pollards (height of a cow’s tongue), stubs (waist height) and coppice (close to the ground).  Alan explained that the few windblown trees represented a special habitat both as a “food” for rotting fungi and insects and the base plate as nesting sites for wrens and, in particular, parasitic wasps. Some ancient woodland indicator plants were noted (Dog’s Mercury, Wood Spurge) and a specimen of Toothwort (Lathrea squamaria) looking like nothing so much as a Sheep’s Jawbone and parasitic on Hazel roots (in this case). 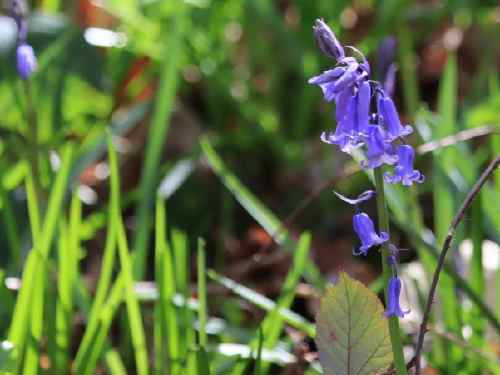 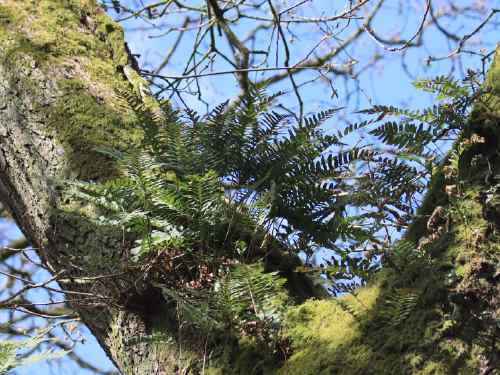 We noted the epiphytic Polypody sitting on the horizontal Oak branches, the “Stag-headed” old oaks (obviously in their third 200 years of their 600 year life), the covering of ivy on the these “Stag-headers” making them so valuable in a wood, and the numerous replacement tree planting examples. Marion Rayner reported that despite its abundance the moss flora indicated nitrogen pollution, not surprising given the intensive productivity of the surrounding fields.

The two woods represented (apart from the enrichment) a dramatic contrast, despite being of the same age according to the documentary evidence (and adjacent) as a result of modern management (in the last 100 years). We retraced our steps to the P&R where the leader found his car to be minus its catalytic converter!