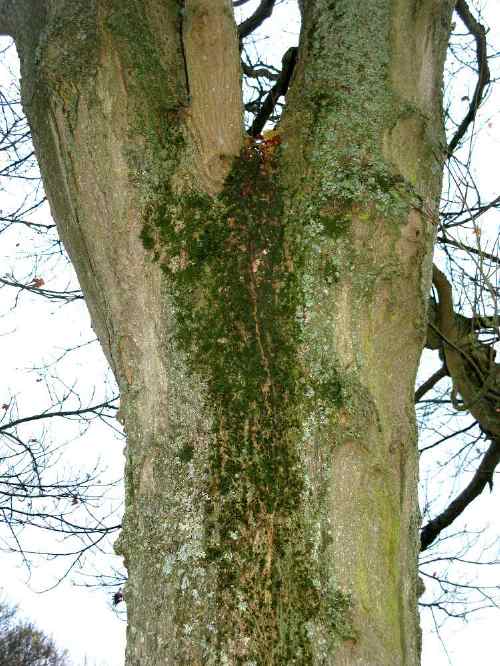 Eleven members attended this meeting to look not so match at individual species but at the kinds of habitat that are provided by tree trunks, branches and twigs. Plants, fungi and lichens that grow on other plants (usually trees and shrubs) are called epiphytes.

Some trees have very smooth bark and few epiphytes are able to attach themselves successfully. Beech bark is usually smooth and it is also quite acidic, which further restricts what can grow there. Two trees examined on the edge of the park appeared to be colonised by only two species of lichen: Lecanora chlarotera and Lecidella elaeochroma. These form crusts which are attached to the bark very tightly. They naturally grow to form more or less circular patches but when growing on young fast growing trees, they become stretched and elliptical or even sausage shaped.

Rough barked trees often have an almost continuous cover of lichens, especially on the sunny side. In polluted areas they will be found to include only a few species such as Xanthoria parietina, a yellowish leafy (foliose) lichen. All lichens are fungi living in association with a photosynthetic partner, usually an alga, which lives in a layer just beneath the surface. On several of the trees examined there were a few large brown aphids that appeared to be feeding on the lichens. Aphids feed using a syphon tube and most species use it to penetrate the leaves and stems of plants to suck the sap. The lichens were quite dry so it is possible they were feeding on the associated algae, or perhaps they were probing cracks in the bark to get at tree sap.

It is usual for the south side of a tree trunk to have more lichens growing on it than the other side. Lichens can tolerate dry conditions and will come back to life again as soon as they get wet. By contrast, mosses, liverworts and algae are mainly found on the north side or at the base of the trunk. Where a tree trunk forks or a large branch emerges, there will often be a point where water runs down when it rains. At the start of the avenue of trees leading towards the botanical garden there was a perfect example with bryophytes running vertically down the trunk. The main moss involved was an Orthotrichum, one of the acrocarpous mosses that produce their spore capsules from the tip of the stem. These often grow in tufts. Those which produce capsules from the side of the stem are termed pleurocarpous and often trail along the surface or have a bushy or tree-like appearance.

Trees that regularly drop patches of bark, such as Planes and old Sycamores, often have pieces of bark that are coming loose and these provide shelter for woodlice, centipedes and small slugs and snails. Crustose lichens often display evidence of grazing by molluscs, which rasp off a thin layer of the surface and even eat the fruiting bodies of some species. It is possible this is to the advantage of the lichen as the spores may travel through the digestive tract unscathed.

A grove of Birch trees with smooth bark that peels off, had no mosses or lichens growing on them except at places where branches emerged and the bark was rough and cracked. On the shady side though, there were large patches of a Trentepohlia. These algae are always orange or red despite the fact that they are classified in the Chlorophyta (green algae). They are quite common on trees in woods and always grow on the shadier, damper side of the trunk. Trentepohlia species are also the algal partner for some lichens. 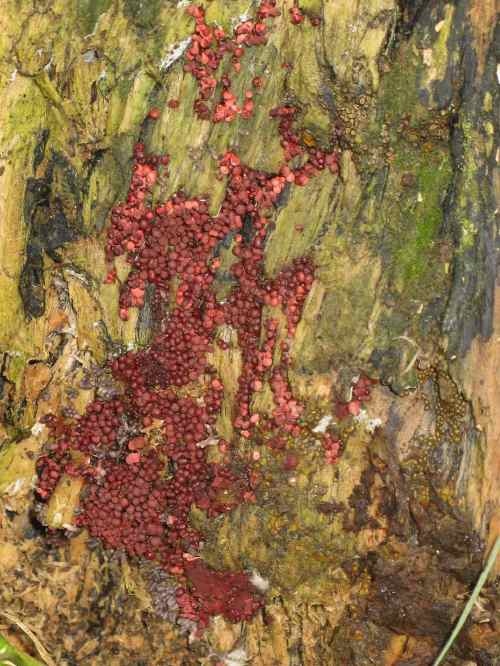 The botanical garden provides a wider range of habitats than the trees in the park because it is more sheltered and there are plenty of low-hanging branches and twigs. A special study was made of the Glastonbury Thorn, a sport of the Common Hawthorn that flowers in winter as well as in the spring. It is an old bush and very twiggy and covered in lichens, some of which had been attacked by a parasitic fungus with salmon-pink fruiting bodies showing amongst dead patches of lichen. Another very showy plant was Dilated Scalewort (Frullania dilatata), a leafy liverwort that is often reddish-brown colour. On the way out of the garden there was the stump of what had been a large Lime tree, and a variety of fungi were slowly rotting it away. There was evidence of a large bracket and a Honey Fungus, both past their best, but Velvet Shank or Winter Fungus (Flammulina velutipes) was in its prime, as was a large patch of a white fungus, probably Split Porecrust (Schizopora paradoxa), attended by numerous fungus gnats: presumably they were either laying eggs, or perhaps had just emerged.

On the shady side there was a patch of bright red berry-like fruiting bodies that were originally thought to be a Nectria species. On examining a photograph later, Alan Feest was able to identify them as a slime-mould (Arcyria species). The brassy spheres on the right are another slime-mould (Trichia species).