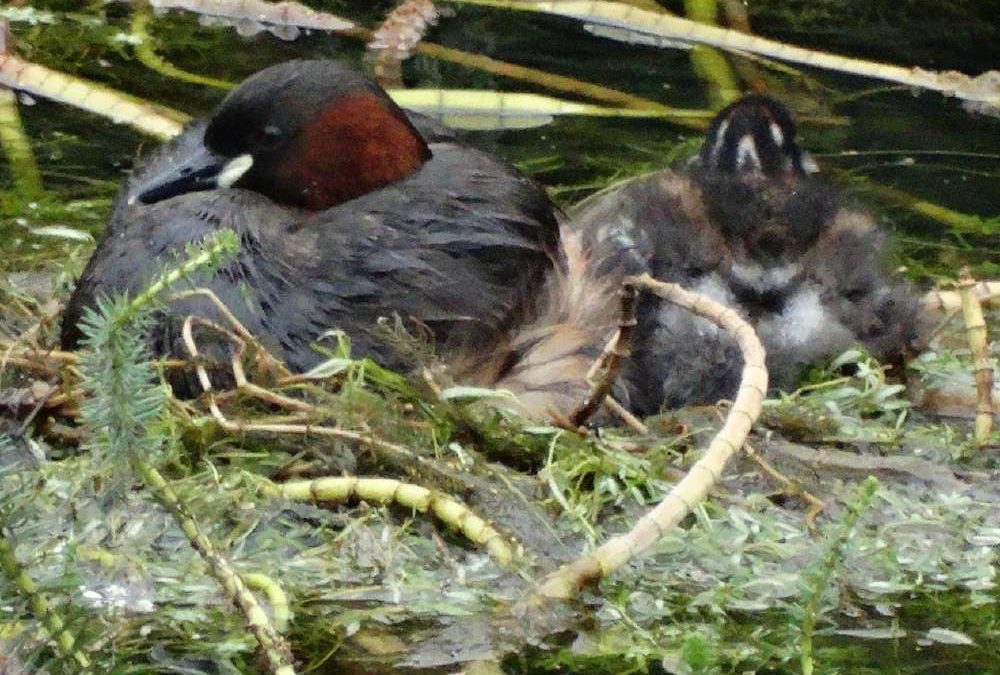 Twelve members made an early start in the delightful surroundings of Prior Park Gardens adjacent to the lower lake to examine, identify and study the contents of a moth trap left overnight close to the lake and surrounding trees.

Before looking at the moth trap we enjoyed views of a Little Grebe and her two ‘humbug’ striped chicks searching the dense weed that covers the lake at this time of year providing some excellent photo opportunities. These beautiful little waterfowl were accompanied by the usual resident Coot, Morehen and Mallard along with a Grey Heron standing like a sentry on the roof of the Palladian Bridge.

Philip Delve first heard and then briefly spotted a Peregrine Falcon as it flew low over the lake and into the woodland on the opposite side of lake but unfortunately most of us missed it!

The contents of the moth trap were examined and recorded at a very leisurely pace with us all taking plenty of time to identify and study each individual species whilst at the same time discussing their various individual attributes, larval food-plants and any unusual life cycles. In all twenty seven different species were identified including a number of micro moths two of which had to examined in more detail to establish their exact species.

The highlights of the catch included The Mocha, a delicately marked moth whose larvae feed on Field Maple, the Clouded Border, another geometer moth with bold black and white markings and a rather late but striking Swallow Prominent which belongs to the Notodontidae family and whose larvae feed on Willow and Sallow.

After a brief comfort break and despite the onset of some light rain we made our way up and out of the garden and into the steeply sloping fields above Prior Park to the east and below Rainbow Wood on the skyline. Here we took time to study one or two of the large and ancient ant hills created by the Yellow Meadow Ant that ‘littered’ the hillside here, some of which were over half a metre across and up to third of a metre high.

We looked at holes made in the side of the ant hills probably by Green Woodpeckers in an attempt to get at the ants and their eggs as well as taking note of the unique flora that grew on the top of these ant hills including what appeared to be a very fine leaved Bedstraw, Rock Roses and Birds-foot Trefoil.

Also of great interest in the field were the numerous Spear Thistles that were in full flower and stood about a metre or so high which were providing shelter under their ‘bulbous’ flower heads for a number of species of insects, harvestmen and spiders including various species of Bumble Bee.

One unusually coloured fly with a red stripe across the centre of its eyes turned out to be the Thistle Gall Fly (Terellia serratulae). It was also noted that a number of the flower heads had turned brown prematurely and had signs of frass being ejected from a small hole in their base, on closer inspection it was found that each contained a small grey caterpillar with a black head, this was later discovered to be the larvae of a handsome looking micro moth called Phycitodes binaevella.

We soon found our way to the top of the hillside just below Rainbow Wood and despite being overcast and still raining we all enjoyed the views of the City and surrounding hillsides before returning somewhat slowly back down to Prior Park Garden.