Fred Rumsey began his excellent talk by ‘wowing us’ with a few photos of extraordinary and diverse kinds of parasitic plant before defining their essential features. First, they derive their nutrition from a host, with varying amounts of detrimental effect. Secondly, they ‘plug’ into the host, with a physical connection called the ‘haustorium’. Thirdly, it is not a symbiotic relationship, but a winner/loser one, in many cases causing the ‘winner’ parasite to be small, short-lived and in a hurry to make seeds before the host dies. Lastly, some plants which lack chlorophyll, for example Bird’s-nest Orchid, were once considered to be saprophytes, but have now been shown to parasitise fungi, tapping into a mycorrhizal relationship between a fungus and a tree. These are now termed myco-heterotrophs. 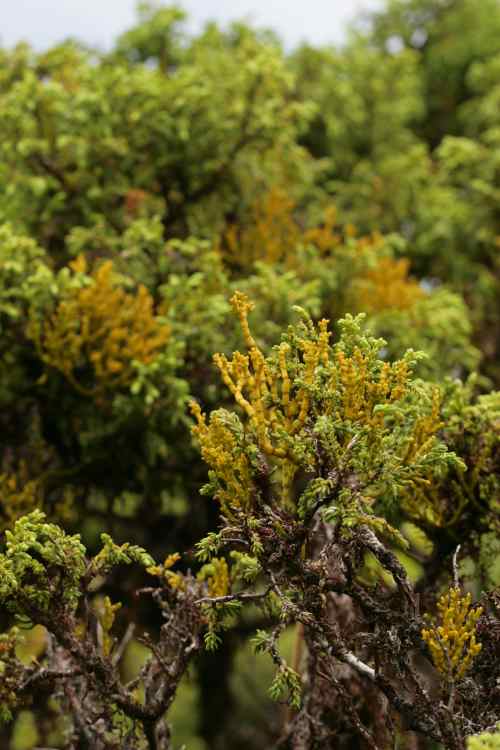 Arceuthobium azoricum: Endemic to the Azores, this Dwarf Mistletoe parasitizes an endemic juniper. It is absent from many of the islands and clearly does not disperse well, which makes its presence in the middle of the Atlantic all the more interesting © Fred Rumsey 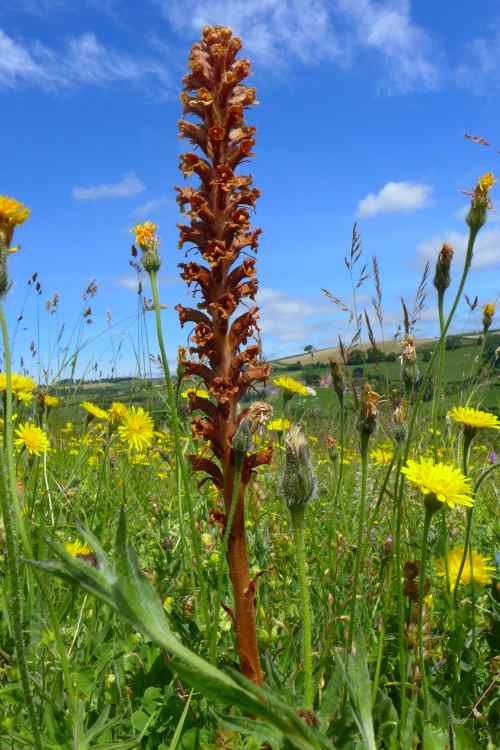 Orobanche elatior – Upper Langridge. Very rare in Somerset and at the western edge of its British range. Typically parasitic on Centaurea scabiosa it may have been attacking C. nigra here. © Fred Rumsey

Broadly there are two groups of parasitic plants. Holoparasites have no photosynthetic activity (e.g. Broomrapes), while the Hemiparasites have green parts and can achieve some photosynthesis though they also rely on their host for nutrition (e.g. Cow-wheat, Eyebright and Yellow-rattle.)

The target of the parasites can either be stems or roots; holoparasites have no roots of their own. The haustorium is a complex structure acting rather like a placenta. Sometimes this only ‘plugs into’ the xylem which provides it with water and minerals; in others the phloem is penetrated too, tapping into the host’s sugars. Like most Angiosperms, hemiparasites have stomata, the holes for gas exchange and water evaporation, using evaporation to draw water against gravity out of the ground. In hemiparasites, the stomata remain wide open, so that ‘leaking’ from them causes the water from the host’s xylem to be drawn through the haustorium and into the body of the parasite.

It is now known (thanks to DNA analysis) that Parasitism has occurred 12 times on the broad evolutionary tree of Angiosperms (flowering plants), across many types of habitat, though none have yet been seen in aquatic systems. There has been convergence of many of them, with enough similarity in their strange forms that some were hitherto thought to be related. DNA analysis is now clarifying the taxonomy: traditional morphological studies are often hampered by the lack of the features (e.g. leaves) which are usually used to separate taxa. Many of the most studied parasitic plants are economic pests. DNA analysis, however is hampered by the fact that the reduction of form is accompanied by reductions in the genomic material.

Much of the rest of Fred’s talk was beautifully illustrated with photos from many distant places, showing the diversity of these interesting plants and their habitats. For example, in the high forests of New Caledonia, the very rare Parasitaxus usta is the only parasitic conifer. It is a tree/shrub under 2m tall which partly connects with its forest host via a fungal network. The Dodder Laurels (Cassytha species), found as far apart as Australia and Gambia, have a sprawling network of thread-like stems, like a tangled version of our native Dodders (Cuscuta species) but quite unrelated: Cassytha is the only parasitic genus in the Lauraceae family.

One of the strangest groups of parasitic plants is the family Hydnoraceae (now sunk into Aristolochiaceae), a group of root parasites producing large reddish scaly flowers, not only foetid but also heat-producing, attracting beetles and carrion flies as germinators. The fruits are edible and attract animals which help to disperse the seeds. They are found in Madagascar, Africa and Central and South America, often on Euphorbia species.

The Dwarf Mistletoes (Arceuthobium species) are also phytogeographically widespread. In the Azores, A azoricum, with dense flower clusters in the crowns of juniper and cypress trees, is a great concern as the trees are dying in large numbers. Interestingly, on one island only, it has begun to parasitise Erica: this host shift may represent incipient speciation. Taxonomic studies on the genus with the largest flowers in the world, Rafflesia, hampered by morphological and genomic reduction, have demonstrated the existence of many species, each found on a different island.

In the UK the Orobanchaceae family includes the broomrapes and toothworts, familiar to many, which send up flower spikes from a root connection with their hosts. Our native Greater Dodder (Cuscuta europaea), only in the south and increasingly rare, is still found along the River Avon in Bath, especially on nettles, while Mistletoe (Viscum album) is apparently expanding its range, perhaps benefiting from the warming climate. Numbers of other rarer parasitic native plants are declining, including Field Cow-wheat and Crested Cow-wheat.

The distributions of some of the broomrapes in Britain are very restricted, yet most grow on widespread hosts: their apparent difficulty in dispersing widely and thriving across their potential habitats is not fully understood. Dodder seeds are heavy and drop to the ground, so can only spread if carried along watercourses, (riverside nettles being a favoured habitat). The seeds of broomrapes also appear to have limited dispersal, but can be long-lived in the soil.

This very informative talk, with stunning photographs and graphics, was greatly enjoyed.