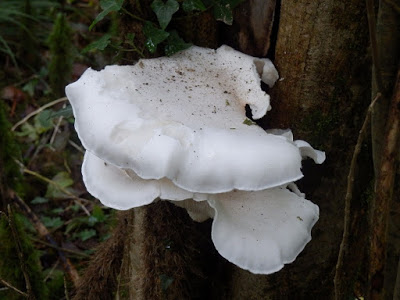 A group of thirteen of us gathered for this meeting on a day that was to prove to be mostly dry, mild and dappled with sunshine. And, as on previous visits, we had a fungal treat in store for us despite the long dry spell that had preceded the meeting.

We started with something that most people would pass by without noticing – the black stromatic growths of Eutypa maura on decorticated sycamore branches. Close inspection of these growths reveals an evenly spaced distribution of tiny pimples, which are the openings from the flask-shaped fruit bodies (perithecia) of the fungus immersed in the underlying wood. The fungus is very attractive to grey squirrels, whose teeth marks score the surface.

Next we found an ash stump with the perithecial stromata of King Alfred’s Cakes (Daldina concentrica) at all stages of development from brown, powdery beginnings through to the familiar black excrescences from which the fungus gets its common name. From here on, progress through the wood was very slow, as we found more and more to examine and talk about. Especially abundant were clumps of Sulphur Tuft (Hypholoma fasciculare) and eggs of Stinkhorn (Phallus impudicus). But there were more uncommon and startling finds too. These included Silky Piggyback (Asterophora parasitica) growing on decaying fruit bodies of Blackening Brittlegill (Russula nigricans), Veiled Oyster (Pleurotus dryinus) and Aniseed Funnel (Clitocybe odora). But pride of place had to go to Scarlet Berry Truffle (Paurocotylis pila), which we had come across on our visit in 2017, and Parasitic Bolete (Pseudoboletus parasiticus) growing closely associated with Common Earthball (Scleroderma parasitica). Despite the name, it is nowadays thought that the mycelia of these fungi both form mycorrhizal partnerships with tree roots, and that the Bolete is stimulated to fruit by the presence of the Earthball.

After a short sojourn for lunch, we walked down to view the waterfall, which was in full spate following recent rainfall, and some of us were rewarded by the sight of a Dipper. Time had flowed surprisingly quickly by now, and so we made our winding way back to our meeting point, where a sparrowhawk briefly skirted by us. But our treat wasn’t over! Most of us then made our way to Helena Crouch’s home for tea and cakes and a walk around her extensive garden, followed by a display of labelled specimens that I had assembled in the meantime. It had been a fine day in more ways than one. 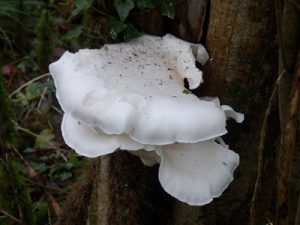