Friary, in the Footsteps of Monks, Wednesday 23 February 2022

On a fine day, 24 Bath Naturalists and members of the local community assembled by the classroom at Friary, warmly welcomed with coffee and cake by our hosts Penny and Richard. We were privileged to be given an introduction to the history of the monastic settlement of Friary by Margaret Dodge. Friary was once the site of workshops, kitchens, breweries and the accommodation of the lay brothers who served the Carthusian monks at nearby Hinton Priory. This was the second of nine monasteries founded in England by the Carthusians, a religious order established by St Bruno in France in 1084. Carthusian monks lived in silent solitude, in “cells”, each a small cottage with a garden in which they grew vegetables. Their food and other requirements were prepared and provided by the lay brothers at Friary, who also tended the sick. Many of the culinary and medicinal herbs they used were grown or gathered locally at Friary: these were the focus of this meeting.

Leaving the classroom area, we passed a large patch of Winter Heliotrope (Petasites pyrenaicus) which would have been unknown to the monks here as it is a species native to southern Europe, introduced for garden ornament in the nineteenth century. Its native relative Butterbur (P. hybridus), which grows by rivers, has huge leaves which were used to wrap butter. 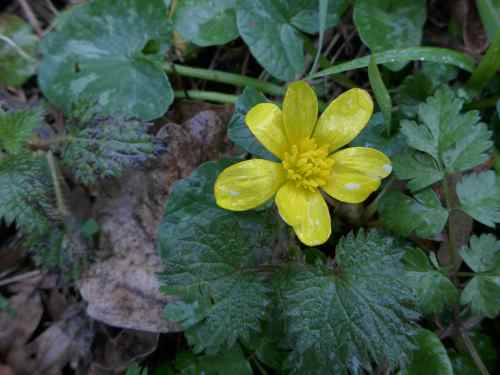 On a bank by the path, we found cheery yellow Lesser Celandines (Ficaria verna), also known as Pilewort. This species exemplifies the Doctrine of Signatures: the belief that the appearance of a plant signifies its use. Celandines have clusters of swollen tubers underground (piles on their bottoms!) and are indeed effectively used to treat haemorrhoids.

A patch of fresh Cleavers (Galium aparine) by the path might have been gathered by the brothers to use as a spring cleansing tonic, being particularly useful as a lymphatic cleanser. Nettles (Urtica dioica) are extremely nutritious, rich in vitamins and minerals, have many medicinal properties, and have also been valued for their fibres. Heading up the slope, we found Marjoram (Origanum vulgare), prized as a culinary herb, and Hairy St John’s-wort (Hypericum hirsutum). The related Perforate St John’s-wort (H. perforatum) is used to treat psoriasis, anxiety and depression, and has effective antiviral properties. Nearby we found Yarrow (Achillea millefolium), a useful styptic, used to stop bleeding from cuts and nosebleeds.

After admiring some pretty Primroses, and spotting a vole, we stopped by an Elder (Sambucus nigra). The flowers and berries are used to make wine and cordials and a syrup made from the berries (Elderberry Rob) is used to prevent and treat colds, fevers and viral infections. The surrounding blackberries, which Rob Randall explained were the “Mulberry Bush” in the nursery rhyme, would have provided nutritious fruits, rich in vitamins and antioxidants.

The lay brothers at Friary kept livestock, selling the meat and using the hides for leather. They used oak bark for tanning the leather, whist their pigs may have fed on acorns and the marble galls on an oak tree (caused by a tiny wasp) may have been used to produce ink. The large Willow (Salix sp.) by the drive is relatively young, but willows near the river would have been useful for their medicinal properties, as well as their timber. It has been recognised for thousands of years that chewing the bark of willow reduces pain and fever: willow is famously the source of salicin, the basis of aspirin.

By the stream, we found young shoots of Angelica (Angelica sylvestris), Cuckooflower (Cardamine pratensis) in bud, and Water Figwort (Scrophularia auriculata). The related Common Figwort (S. nodosa) was traditionally used to treat scrofula, a chronic skin disease. It is still used to treat psoriasis and chronic eczema. Meadowsweet (Filipendula ulmaria) was also growing on the stream bank: this is used as an anti-inflammatory treatment, like willow, and the brothers may have used it as a strewing herb on their floors. In tall poplars at the edge of the wood, we spotted two clumps of Mistletoe (Viscum album). The leaves of Mistletoe are used to treat headaches and high blood pressure, but the berries are poisonous to humans, although much loved by Mistle Thrushes and Blackcaps. 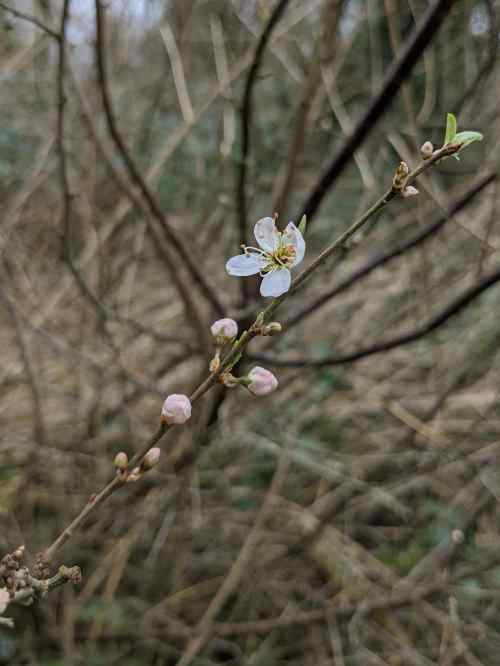 Returning to the classroom, we were treated to hot soup and more cake. Refreshed, we took the footpath to Dunkirk Mill. Along the way, we learned that Ivy can be used to make soap and Ransoms (Allium ursinum) to flavour soup. We admired lichens on a fallen twig and Scarlet Elf Cups (Sarcoscypha coccinea) on a log.

In a hedgerow we found Blackthorn (Prunus spinosa), the fruits of which (sloes) were used in preserves. Hawthorn (Crataegus monogyna) has many uses: the young leaves are tasty, whilst the shoots, dried flowers and berries are used as a cardiac tonic. Dog Rose (Rosa canina) was also in the hedgerow. Rose hips are rich in Vitamin C and traditionally made into Rose-hip Syrup, taken to prevent colds. A tincture made from the hips is used to treat arthritis. 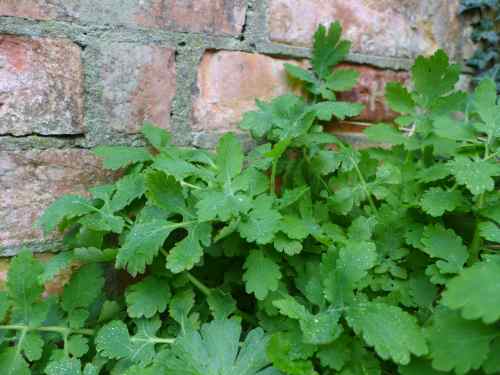 By Dunkirk Mill we found Greater Celandine (Chelidonium majus), a member of the Poppy family (unrelated to Lesser Celandine) which is usually found near habitation. The yellow sap is used to treat warts and verrucas.

A large patch of Hidcote Comfrey (Symphytum x hidcotense) was just beginning to flower. This is a garden escape but its native relative Common Comfrey (S. officinale) grows at Friary.

The roots are used to make an ointment to treat bruises or a poultice for sprains and strains. All comfreys are useful in the garden, added to compost heaps and steeped in water to make a plant feed.

From Freshford Mill we retraced our steps, passing leaves of Bath Asparagus (Ornithogalum pyrenaicum) on a bank, the young flower shoots of which were traditionally sold in markets of Bath and Bristol as a substitute for asparagus.

The lay brothers of Friary, in whose footsteps we walked, worked as a community , helping others. This meeting was also a collaborative effort and I am hugely indebted to Penny and Richard for so generously providing the venue, refreshments and sustenance, and for much of the planning; to Barbara Lewis for sharing her knowledge of medicinal uses of plants and Rob for extra snippets of information; to Margaret for her fascinating historical introduction, setting the scene for our walk; and to all participants for their interest.