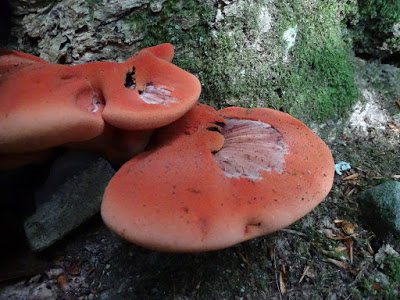 A group of nine of us gathered under the magnificent veteran oak trees outside East Woodlands Church on a morning that began coolly but became increasingly warm and sunny towards lunchtime. As in 2017, and despite the hot, dry early-mid-Summer weather, we had a real fungal treat awaiting us, easily making a list of over 60 species.

We began by finding a variety of fungi growing underneath and upon the oak trees. These included several ectomycorrhizal fungi – Scaly Earthballs (Scleroderma verrucosum), some Xerocomus cisalpinus boletes and Sepia Brittlegill (Russula sororia), and two bracket fungi – Beefsteak Fungus (Fistulina hepatica) and a magnificent Oak Bracket (Inonotus dryadeus). Then we made a quick diversion into the churchyard to examine some fine growths of Squirrel-tail Moss (Leucodon sciuroides) on a tombstone.

As we made our way along the byway towards the beech-wooded Roddenbury Hill, we stopped briefly to examine some beautiful freshly emerging specimens of Beefsteak Fungus, as well as some colourful Purple and Scarlet Brittlegills (Russula atropurpurea and Russula pseudointegra). On and around the hill we encountered numerous Ceps (Boletus edulis and B. reticulatus) and Blushers (Amanita rubescens), Scarletina Bolete (Boletus luridiformis), a variety of Brittlegills, Small Stagshorn (Calocera cornea) and Grey-spotted Amanita (Amanita excelsa).

We then took the path downwards into the very different wet woodland habitat of Lower Woods. Here, as in 2017 we came across two outcrops of perhaps our most exciting find of the day, the deep pink jelly fungus called Salmon Salad (Guepinia helvelloides). 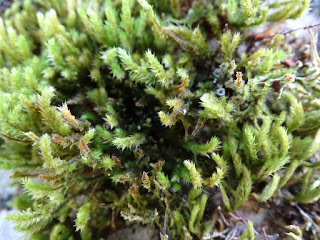 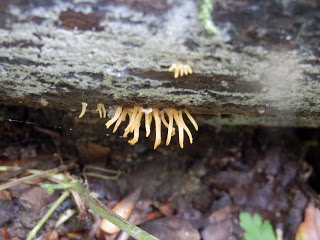 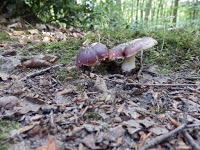 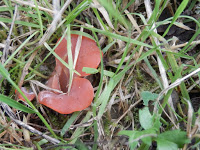 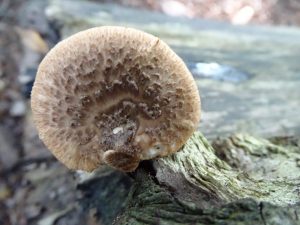