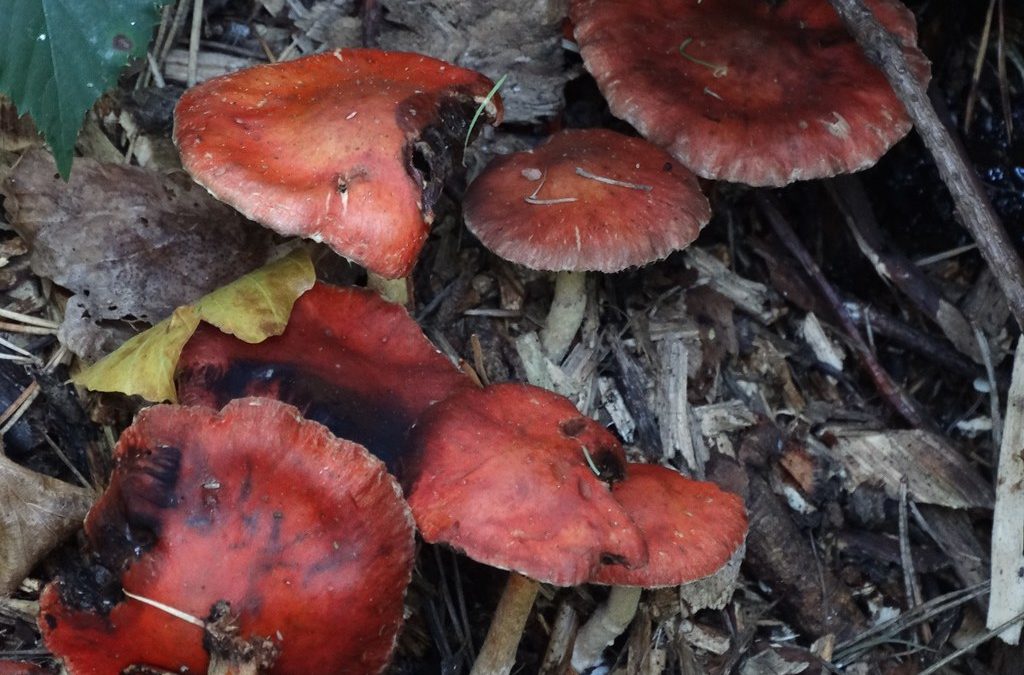 On a bright morning 13 of us gathered with the day’s intention to improve our knowledge of fungi in waterside habitats as well as enjoy the bird life of Chew Valley Lake. Our first impression was that the recent dry weather did not bode well for finding many fungi, but as we searched the woodland around the car park, Alan R quickly found a group of red-capped agarics, which he identified as Redlead Roundheads (Leratiomyces ceres). This once rare fungus had read the book which says that it is increasing in frequency and is often found on piles of wood chips around car parks. 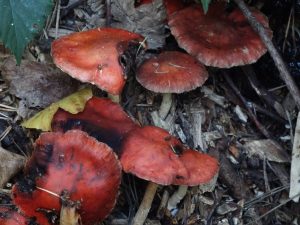 We also found Grey Inkcap (Coprinopsis cinerea) fruiting prolifically at all stages of maturity, and a mass of the slime mould Fuligo septica, looking like a mass of ash and soot as well as a beautiful array of Spectacular Rustgill (Gymnopilus junonius).

Moving from the Car Park we walked to the bittern trail confirming that indeed this was not a good season for fungi but looking at a section of reeds cut by the water company we found numerous small, greenish yellow fruit bodies of Hypholoma ericaeoides which was found elsewhere on the lake last year by Alan F. It is said to be uncommon but since for much of the year the sites where it occurs are underwater it is perhaps not often looked for. On the pathway to the Bittern Trail we crossed a stream and observed a water rail on the mud which then entered the reeds just before we got close to it.

Finally at the Bittern Trail Alan F explained why the willow carr habitat we were in was so special and that we had last year recorded many bryophytes there living on the horizontal branches of the collapsed willows. 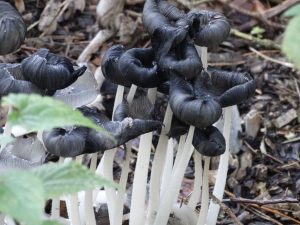 These rotten trunks and stems were found now to be entertaining some large fruitings of Common Inkcap (Coprinopsis atramentaria – not to be consumed with alcohol!) and Sulphur Tuft (Hypholoma fasciculare). Meanwhile we heard several Cettis’s Warblers shouting their song at us from the willows that they inhabit (Alan F explained that for some reason these birds have different number of tail feathers to all other birds). Searching for the rare Alder Bolete (Gyrodon lividus) found previously proved fruitless, perhaps because we were too late (last year they fruited in September), but we did find fine a beautiful Beefsteak fungus (Fistulina hepatica) and a fine group of Dead Man’s Fingers (Xylaria polymorpha).

Lunch in the fit-full sun back at the car park was followed by a visit first to Heron’s Green where we all had good views of a water rail (Alan F explained that a large proportion of the Water Rails ringed in the UK was by bird ringers at the lake). Meanwhile a Great White Egret flew in and proceeded to imitate a statue in the distance.

Moving on to Herriot’s Bridge, we had an excellent view of a Kingfisher which obligingly hovered for a while like a humming bird.

Alan F then led the party through one of the net lines adjacent to the bridge where we saw two ‘jelly fungi’, Tripe Fungus (Auricularia mesenterica) and Leafy Brain (Tremella foliacea). This part of the lakeside was clearly eutrophic as the plant growth was lush and there were a lot of nettles and the reeds were 3m tall. Back then to the bridge for 15:30 after a very varied visit illustrating that there is still a lot to be learnt about this ‘Ramsar’ site (wetland of international importance). 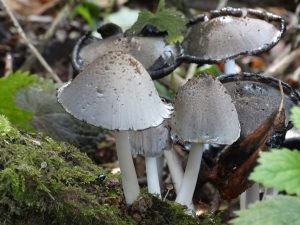