The first dragonfly species seen was a male Emperor hawking over and the side pound close to the top of the locks. Searching through the dense foliage around the side pound, we found a froglet, a Scarlet Tiger moth (there seem plenty around at the moment) a nymph of a Dark Bush cricket, and many Blue tailed damselflies, with a few Azure and Common Blue damselflies. A Stock Dove coo-ed unseen in the tall trees adjacent to the towpath as we walked down to the next side pound. 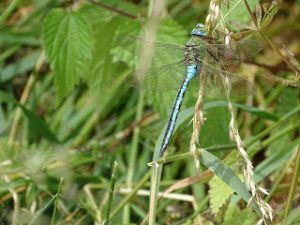 Swifts swooped low, occasionally taking a drink, and I noted only one Swallow. Other birds using this habitat included Tufted Duck, Mallard, Mute Swan, Moorhen, Grey Heron. We had a blue-flash of a Kingfisher as it darted passed us at speed, disappearing in the vegetation in the next side pound as we wandered down the grassy path adjacent to the Diamond Jubilee Woodland. In the hedgerow, Alan R drew our attention to a Great Mullein plant which was, not unsurprisingly, hosting a number of Mullein moth caterpillars. I was lucky to be looking up whilst we gathered for a short break around midday to see a Red Kite drift over the trees and most members saw the bird if only very briefly. 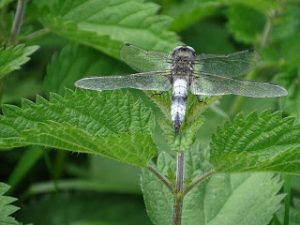 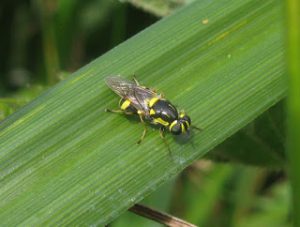 I spotted smaller dragonfly being harassed by the Emperor and recognised it as a male Scarce Chaser, with its pale blue abdomen. We found several more as we explored more side pounds, some insects traversing the grassy paths between the pounds and landing on nettles. We could see that the male had mated with females, showing the distinctive grey copulation marks down each side of their abdomen. Rob R and some other members had a good view of an orange-brown female. I had mistakenly identified a brown dragonfly among the male Scarce Chasers as a Four spotted Chaser. However, studying my field guide after the meeting, I read that the females will darken to a dull brown colour; I did see briefly a male chaser joined to, presumably a female, darting over the water. A lone Four spotted Chaser in this habitat was unlikely! The Brown Hawker flying around us as we continue walking down the grass slope was unmistakable! Keeping around the side pounds, we located two singing Sedge Warblers and spent some time listening and watching one of them at close quarters. Within its varied song, I could pick out mimicry of the songs and calls of Blue Tit, Goldfinch, Swallow and Yellow Wagtail.

We returned to the car park via paths through the Diamond Jubilee Wood, noting Ragged Robin, Rough Chervil, Fleabane and Grass Vetchling. I located a male Yellowhammer at the top of a tall tree by song and we could approach the bird, so intent on making its presence known. Other birds heard here included Common Whitethroat and Blackcap and it was good to see a male Kestrel among the soaring Buzzards. 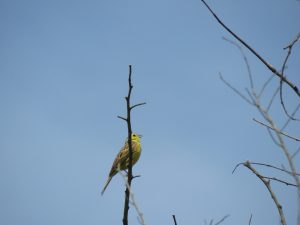 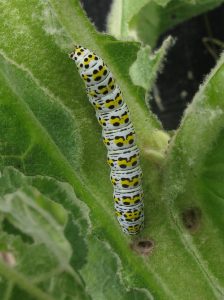