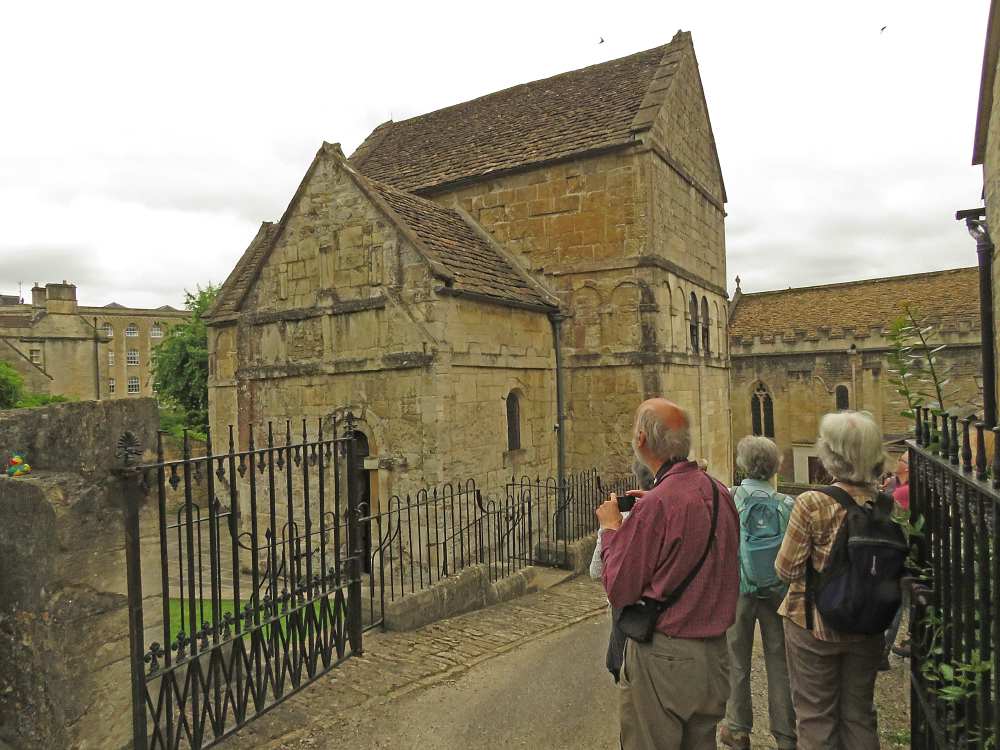 A day that had started bright and sunny turned overcast by the time 12 Nats members met at Bradford-on-Avon station. This had the fortunate advantage of bringing the Swifts down low, and screaming parties soared above us as we started our walk while a pair of Ravens also flew silently overhead.

Our first Kingfisher was spotted as we crossed McKeever Bridge (named for local hero, Ed McKeever, kayak gold medallist at the 2012 London Olympics) which has lovely views along the Avon where some of the resident Mute Swans attracted our attention. We also saw our first Banded and Beautiful Demoiselles.

We continued through Holy Trinity churchyard and on to the little Saxon Church, built in the early 11th century. Here we spent some time happily watching the Swifts swooping above us and coming down low, sometimes seemingly to perch on the roof on their non-existent feet. A few seemed to be entering under the roof tiles so possibly this was a nesting site.

We continued along some of Bradford’s interesting town paths and across the railway line to North Meadow where we did a circuit looking out for wild flowers and butterflies. We spotted Red Admiral, Small Skipper, Ringlet and Meadow Brown butterflies, while amongst the flowers were Yellow Rattle, Meadow Cranesbill, Purple Loosestrife, Chicory, Tufted Vetch and Oxeye Daisy. The surrounding trees gave us opportunities to hear Chiff-Chaff, Blackcap, Greenfinch, Song Thrush, Wren, Great Tit and Robin and as we re-crossed the river, by way of the pack-horse bridge, a few lucky members had an excellent view of a Kingfisher perching in a nearby tree before flying off making its distinctive call.

We continued down the river spotting Meadowsweet, Burdock, Teasel, Greater Willowherb and Comfrey, while hearing Goldcrest and Coaltit. We joined the Kennet and Avon Canal at the swing bridge where some of us were intrigued to watch the opening and closing of the bridge to allow a vehicle across to the Sewage Works.

As we walked back along the canal towards Bradford’s Tithe Barn, the Nissens spotted a Branched Bur-reed and John risked falling into the canal to get a photo! We also added Mallow, Hemp Agrimony, Toadflax and Nipplewort to our flower list.

We made a short detour to look at Bradford’s community orchard where a useful information board identifies the species and their donors, before walking through the Barton Farm complex of interesting historic buildings. Swifts were in evidence again and the sun came out as we returned to the start of our walk.