Nine members of the Society met for this gentle stroll along the north bank of the River Avon from Saltford to Kelston Mills, aimed primarily at seeing insects and dragonflies in particular. Unfortunately, early sunshine was quickly replaced by cloudy conditions and one very heavy shower in the middle of our walk. Coupled with a strong south-westerly wind funnelled down the valley, this severely restricted our chances of seeing many insects.

However, two Ringlets were on the wing in the car park before we lost the sun. As we descended from the railway path onto the river bank a family of recently fledged Swallows were lined up on the barbed wire fence waiting to be fed by their ever-busy parents, hunting flies out over the adjacent field. A passing House Martin allowed a nice comparison between the two species. 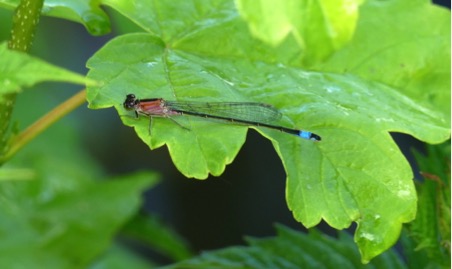 Even at this early stage it became obvious that insects were not going to be conspicuous even though the recce earlier in the week had produced plenty and of a nice range of species. That said, several Blue-tailed Damselflies seemed to be braving the conditions and one of them was showing a reddish colouration on the thorax just below the head, which suggested that it was one of the variants of the form rufescens, which I for one had never seen before.

A little further on, a Reed Warbler was in full song but unfortunately this coincided with the heavy shower blowing through and by the time we turned around at Kelston Mills, we were all rather wet! At least the rain had eased off by now and we continued our search on the return leg. This led to us finding both White-legged and Red-eyed Damselflies and it was whilst watching these that Shona found the only Scarce Chaser of the morning. It seemed to have found a slightly sheltered spot in the vegetation and gave good views for a few minutes.

One or two Azure Damselflies were also moving and another Reed Warbler put in the briefest of appearances as it passed close-by. A few more Blue-tailed Damselflies were visible on the way back including the putative rufescens. My thanks to Robert Hargreaves for use of his excellent photograph of the insect. A brief appearance by the sun prompted a Meadow Brown to perform a quick fly-past but we saw no other butterflies.

Nearing the end of our walk, both Blackcap and Chiffchaff could be heard singing from the wooded areas and a Little Owl perched up nicely in the rock strata bordering Mead Lane and gave everyone excellent, if somewhat distant, views.

The walk concluded back at The Shallows car park with another shower but I think we just about salvaged something from the morning to make it an enjoyable occasion, despite the lack of sunshine!