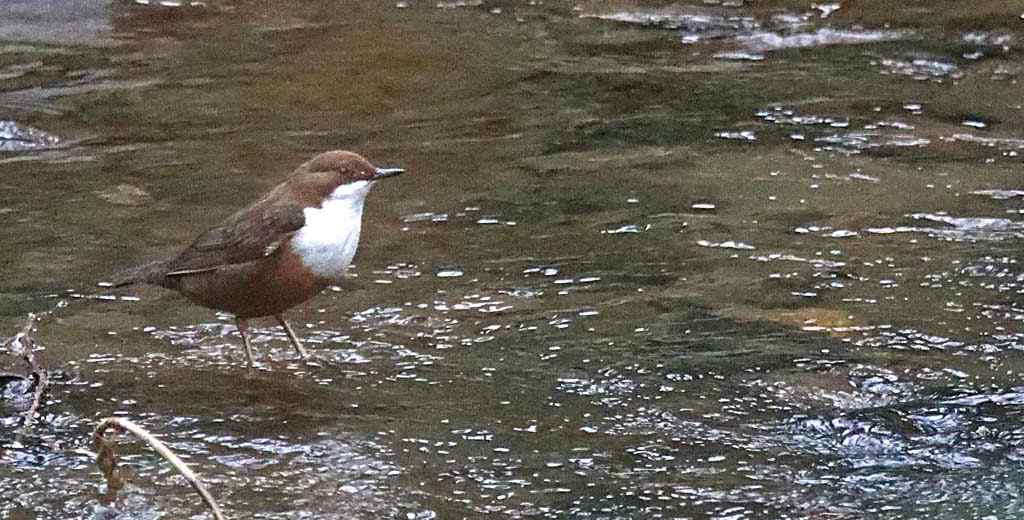 Leaders: Andrew and Jane Daw
A good number of people joined us at Willsbridge Mill for a field trip which had originally been planned for Kelston, the persistent rain having led to flooding around our original route.

Willsbridge Mill Reserve, managed by the Avon Wildlife Trust, is a small reserve nestled in between modern housing estates containing ancient woodland that was once part of the Kingswood Forest.

We started our walk at the top of the reserve noting the beautiful song of a Mistle Thrush and the chatter of a group of Starling. Walking down the slope we wondered at the geology of the site noting where ancient quarrying had occurred. We were pleased to hear Goldcrest (age hadn’t diminshed our hearing yet!) as we made our way down to the old flour mill which stands alongside the Siston Brook (a tributary of the Avon). Cellar snail was found on the walls surrounding the mill.

We were excited to spot a Dipper which gave us all great views and even sang for us. We also saw the elegant Grey Wagtail on the banks of the brook. Hazel Catkins were to be found around the reserve so we searched the ponds for any signs of Frog Spawn but Spring hadn’t quite sprung yet.

As we climbed up alongside the old coal Dramway we noted Nuthatch and Great Spotted Woodpecker. There were plenty of Grey Squirrel keeping busy in the treetops causing great consternation amongst the Magpies.

As we approached St. Anne’s church we saw the sad sight of an enormous yew tree on the ground. A local gentleman told us that this 800-year-old tree had come down, due to the waterlogged ground, causing some of the graves in the churchyard to collapse too. Although sad it was interesting to observe the red coloured tightly ringed wood and to imagine what the tree had ‘witnessed’ over those 800 years. We have since learned that St. Anne’s has decided to commission a carving from part of the trunk which will be displayed in the church.

We moved on, spotting a wren and a patch of Lesser Celandine on the cusp of flowering. As we neared the end of our walk David Goode heard a Marsh Tit and back at the top of the hill we had nice views of Long-tailed Tits and a pair of Jay. Our final bird tally was 23 species.