A group of 17 of us gathered in the car park of the American Museum on a brilliantly sunny, mild morning, and were met by the Head Gardener, Andrew Cannell, who provided us with some helpful background information and advice. Most of us, apart from a small group of Lepidopterists led by Mike Bailey and Paul Wilkins, then made our way into Hengrove Wood, a lush, moist and shady area of ancient mixed deciduous woodland on the east-facing slope of Claverton Down. Given the time of year, we focused much of our attention on fungi, lichens and bryophytes and quickly began to assemble quite a significant list of these organisms, amongst the highlights being the tiny liverwort, Micheli’s Least Pouncewort (Lejeunea cavifolia), Velvet Shield (Pluteus umbrosus), Collared Earthstar (Geastrum triplex), Inky Mushroom (Agaricus moelleri) and the breathtakingly coloured Cobalt Crust (Terana caerulea). 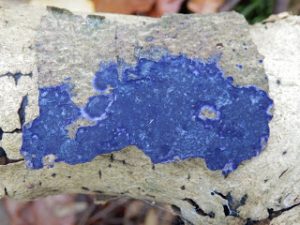 After lunch, we made our way down through Conygre Wood, an area of relatively dry woodland containing some very large Grey Poplar trees as well as a mature English Elm and several mature Birch trees, some of which were inhabited by the Birch Polypore, Piptoporus betulinus. Emerging into the adjacent grassland and garden area, we came across a tufa-lined spring, where Helena Crouch was delighted to find the first of many well-established gatherings of Maidenhair Fern (Adiantum capillus-veneris) which had last formally been recorded here in 1978. Also present in profusion, here and elsewhere associated with moist seepages was Curled Hook-moss (Palustriella commutata).

By the end of the day we had recorded 75 species of fungi and lichens, over 50 bryophytes and over 100 vascular plants. A subsequent visit by us (Alan and Marion Rayner) on 27th November added a further 25 fungi and lichens and around 20 bryophytes. David Goode meanwhile made a list of 19 bird species, including Marsh Tit and Tree Creeper, and the Lepidopterists found 47 species of insects. Amongst the latter was the Virgin Bagworm (Luffia ferchaultella). The larvae of bagworms form a case usually made from debris collected from their food plant. This provides them with camouflage as they feed exposed on lichen-covered surfaces such as walls, tree trunks and fence posts (as on this occasion). L. ferchaultella is unusual in that the wingless females are self fertile, hence their common name, and no males are known to exist in Britain. This is a new site for the species with only a handful of other sites known. Last, but not least, Alan Feest reported two rare slime moulds: Physarum notabile (4 previous British records) and Hemitrichia abietina.

It had been a very interesting and enjoyable day and we all agreed that further recording visits in Spring and Summer would be worthwhile to provide a fuller picture of this biodiverse, unspoilt and beautiful locality close to Bath. 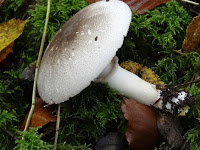 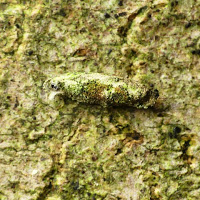