Star of Bethlehem (Ornithogalum umbellatum), 10 May 2017 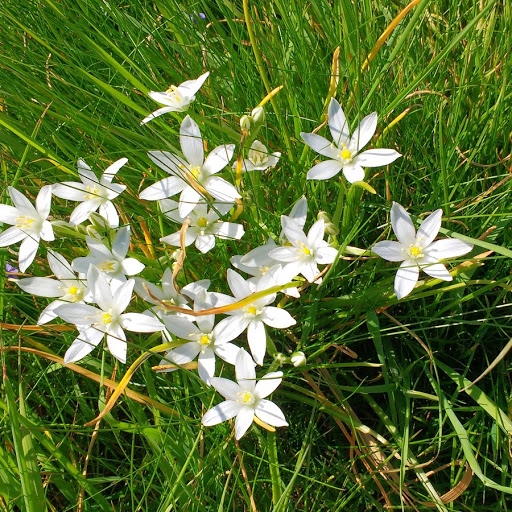 I came across this on the edge of the river bank yesterday.

That is Star of Bethlehem (Ornithogalum umbellatum). There are 2 subspecies, one introduced (often grown in gardens) and one perhaps native in East Anglia.

Whichever subspecies yours is, it is probably an introduction here. The introduced one (subsp. umbellatum) has larger flower and up to 20 of them. Your photo shows around 20 flowers and buds, but I can’t tell whether they are all on one stalk. The “probably native” one (subsp. campestre or angustifolium, depending which book you look in) has 4-12 flowers. I think these are badly recorded at subspecies level and Stace says that further study is needed, which slightly puts me off trying! If it is growing right on the river bank it may have arrived by river from a garden, as a bulb or seed.

There is quite a lot of it in the Midford and Wellow area so it has been there for many years. It is well established on the Hinton Charterhouse edge of Cleave’s Wod, there are scattered populations along a track and FP which run between White Ox Mead near Peasedown, along the ridge between the Wellow Brook and the Cam Brook. it also grows by the Coal Canal locks where the feeder stream joins the canal from Rowley Wood and on the track from near Burnt House down to the pub at Combe Hay. Given that there used to be a colony of Tulipa sylvestris on the slopes near Dunkerton it may have arrived with grape vines either in Roman or mediaeval times.