Leader Lucy Starling
Fourteen members and 1 non-member joined me for an approximately 4.5-5 mile circular walk on a warm morning and early afternoon with constant sunshine and a light breeze. A male Blackcap sang quite vigorously in an ash tree as we gathered on Beckford Road; indeed, this species of warbler was encountered at intervals along most of the circuit together with Chiffchaff. The Common Whitethroat which I had heard singing the day before in bramble below the railway line not far into NT Bathampton Meadows beyond the metal gate, failed to utter a note. The bird on territory by New Leaf Farm was likewise not very obliging, so I was relieved when a pair were noisy and visible in the riverside vegetation at Batheaston! 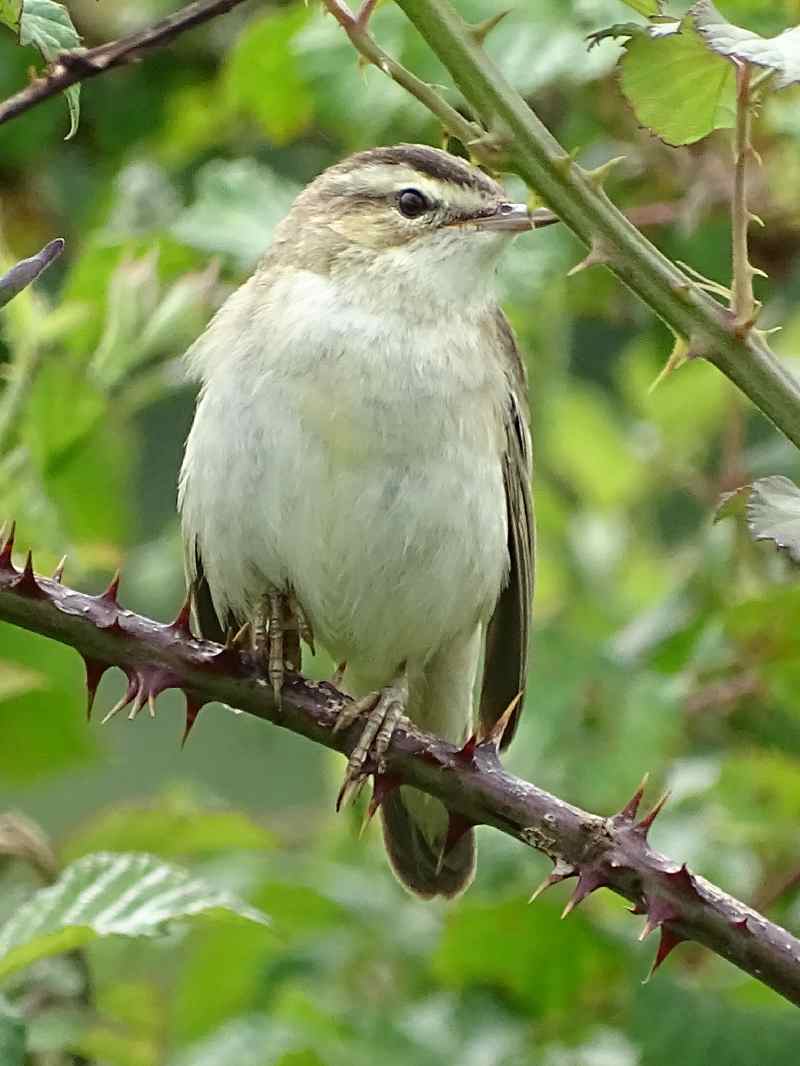 The other warbler species I particularly wanted to show the group was Sedge Warblers in “my ditch” not far from the Batheaston by-pass. The day before, the male was at the western end of the ditch some distance from where it nested in 2020 and 2021 and it sang briefly, starting with its usual rapid low “churr” sound and then some Barn Swallow alarm notes and a bit of Blue Tit alarm. On the day of the walk, as we stood quietly in anticipation, it finally uttered a very quiet “churr” that I think I alone heard, and then it flew into view along a good length of the ditch from west to east, back into the nesting area. It churred again from deep cover, heard by all in the group. I saw the bird for the first time in the third week in April, and, by this behaviour, it seemed I now had a breeding pair and eggs laid in the nest. The only other bird present in the ditch was a Dunnock.

A pleasant 10 to 15 minutes break by the Tollbridge at Batheaston proved timely; some four or five Sand Martins appeared overhead and then dropped down, flitting over the bridge and river. Two were seen entering drainage holes in the stonework below the balustrade. They have nested here for many years. We walked on to Batheaston and a few of us took a quick look in The Secret Garden before we spent some time overlooking the River Avon and beyond that, the Avon Wildlife Trust reserve. I was surprised to pick up some brief song of a Garden Warbler, a species I failed to find locally in 2020 and 2021 and most of us caught a glimpse of the bird which, typically, kept to dense cover while, as I mentioned above, the Common Whitethroat were more visible.

Our next stop was in Bathampton Farm field below the railway line and we walked alongside the river below Bathford. Song was tailing off in the heat of the midday sun, but we did hear another Common Whitethroat, brief song of a Treecreeper and the ubiquitous Blackcap. Some members by this point had heard a screaming Swift and had seen a Raven. Alison L drew our attention to a circling bird of prey, a male Kestrel, to add to our earlier Buzzard sighting. Not long after that, we saw a male Peregrine circling over Batheaston which then dramatically “stooped” at considerably speed (typical hunting prey behaviour) and we lost sight of it. There was nothing of note to report on our canal towpath return route to Beckford Road.

Non-avian interest included Banded and Beautiful Demoiselle dragonflies and one member told me she saw a Large Red damselfly. We found a number of Green-veined White, Peacock, Holly Blue and Orange Tip butterflies. Also, there were many newly emerged Mayfiles, and having checked the photograph in my insect field guide, they were likely to be Drake Mackerel Mayfly, Ephemera vulgata.

NB – This walk can be shortened and there are various starting and finishing points using car parking at The George PH Bathampton and in the free car park at Batheaston.