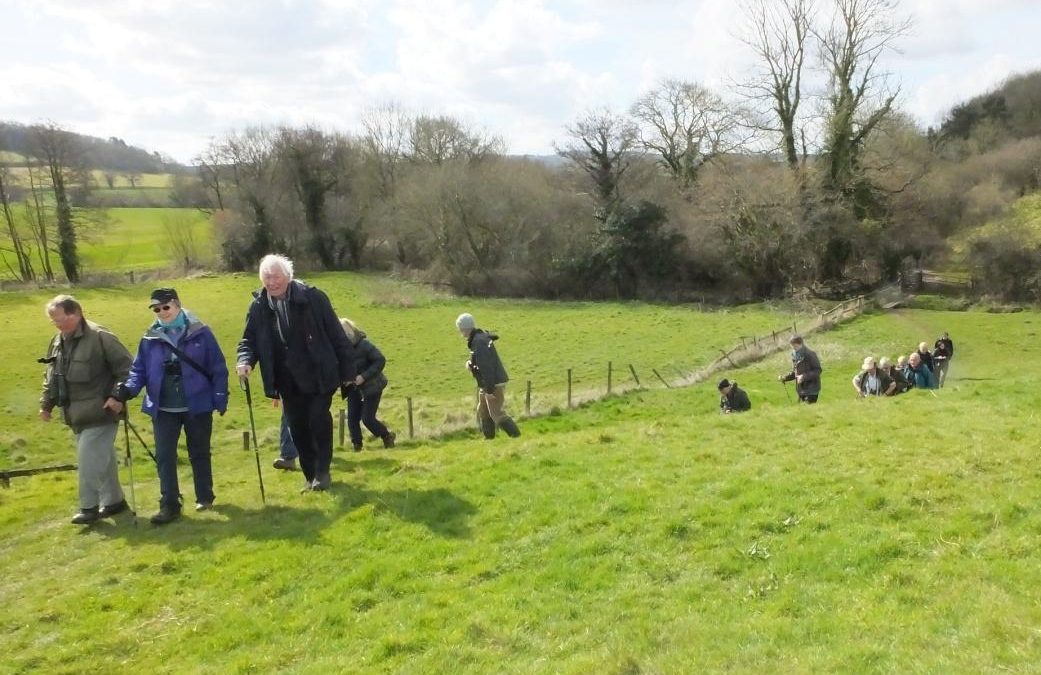 Twenty members gathered for this first walk from Compton Dando towards Chewton Keynsham in the River Chew Valley. The route had had to be carefully chosen due to the very muddy under-foot conditions after so much winter rain. A singing Chiffchaff entertained us before we set off and a a Dipper gave fleeting views to only a couple of the group as we crossed the river bridge. As the walk commenced several more Chiffchaffs were heard and seen together with common species such as Dunnock, Robin and Blackbird but eventually the first Willow Warbler of the year was spotted amongst the Chiffchaffs. This was quickly followed by a pair of Bullfinches, although they weren’t always easy to see in the dense cover. As we emerged into a more open area several stands of Lady’s Smock were in flower and some Primroses added to the early Spring colour.

The path then led us into a wooded section of the walk where Blue, Great and Long-tailed Tits were seen and eventually a Blackcap was heard singing, although it too could be tricky to see as it was singing from thick cover.

Our Our group leaving the wooded area and climbing up for views over the valley.
As the sun broke through, there was plenty of bird song to listen to and Raven, Green and Great Spotted Woodpeckers were all heard and seen, with the latter drumming down in the river-side willow trees. Buzzards were now up in good numbers with at least eight soaring on thermals, joined on a couple of occasions by a single Sparrowhawk and a Kestrel.
What we assumed to be a falconer’s bird caused a stir at one point, resembling a harrier with its white rump and long tail. However, due to its rather broad wings and chestnut upper-wing coverts, the consensus was that it was probably a Harris’s Hawk, although no-one was able to spot any jesses

The return produced more of the same until a Siskin was at first heard and then seen extremely well in river-side vegetation. Being an adult male in Spring plumage, it was a very smart bird. The walk concluded with the Willow Warbler finally giving us some of its song and perhaps better views than on the outward journey and was probably joined by a second individual.

Although we did not record any butterflies on the walk, a lone male Brimstone was in the lane as I drove home towards the Two-headed Man from Compton Dando. Initial feed-back suggests that this might be a walk that we do again next year?