It was a fine morning and even better when the sun came out as 18 members gathered on the Riverside Path opposite St John’s Church. After welcoming everyone David explained that the Hawk and Owl Trust had erected a nest box on the church in 2004 to encourage Peregrine falcons to nest. We learnt that a pair is resident throughout the year and breeding has occurred every year since 2006, producing over 30 young. Right on cue someone spotted the male bird perched on the weather vane at the top of the spire. All eyes were on it as it suddenly stooped at great speed only to return shortly afterwards having missed its intended prey. It was an exciting start to our walk.

Before setting off Helena encouraged members to participate in the annual New Year Plant Hunt run by the Botanical Society of Britain & Ireland. All we had to do was record everything found in flower during our three-hour walk; so while some members scanned the skies for birds, others scrutinised the ground for flowers. In sheltered streets near the river, we spotted several common plants which seem to flower all year, including Shepherd’s Purse (Capsella bursa-pastoris), Annual Meadow-grass (Poa annua) and Groundsel (Senecio vulgaris). Three garden escapes on walls were soon added to the list: Ivy-leaved Toadflax (Cymbalaria muralis), Adria Bellflower (Campanula portenschlagiana) and the pretty daisy-flowered Mexican Fleabane (Erigeron karvinskianus). By the time we reached the canal, we had a list of nearly twenty species in flower. As we set off we noted a Grey wagtail beside the river, together with Black headed gulls and Herring gulls, and Fergus alerted us to a Sparrowhawk circling overhead in Pulteney Gardens. We also had good views of a Heron perched high in a tree next to the Kennet and Avon Canal.

After crossing the footbridge we took the path up Bathwick Meadows, having fabulous views across Bath (photo above, © Tom Pinckheard),  but finding the meadows botanically bleak and wintry! Sadly there was no sign of winter thrushes either, but we enjoyed watching a party of about ten Pied wagtails searching for insects in the short turf, and we had remarkably close views of a Buzzard being harried by a Carrion crow. Richen’s Orchard held a variety of ‘garden’ birds, including Woodpigeon, Dunnock, Coal tit, Robin, Blackbird, Magpie, Song thrush and a small party of Chaffinches. A Greenfinch was calling incessantly with its nasal chirr. As we descended the steps into Smallcombe Valley we were surprised to see a Red admiral butterfly sunning itself.

In Smallcombe Cemetery we noted Great tit, Blue tit and Wren, and heard the distant call of a Green woodpecker. A Buzzard was perched on a low branch above the pond next to the cemetery, providing excellent views. It was in exactly the spot where David saw a buzzard catching frogs in the act of spawning in March 2021. Maybe frogs were spawning earlier this year as a result of the unseasonably warm weather. The Buzzard would know. 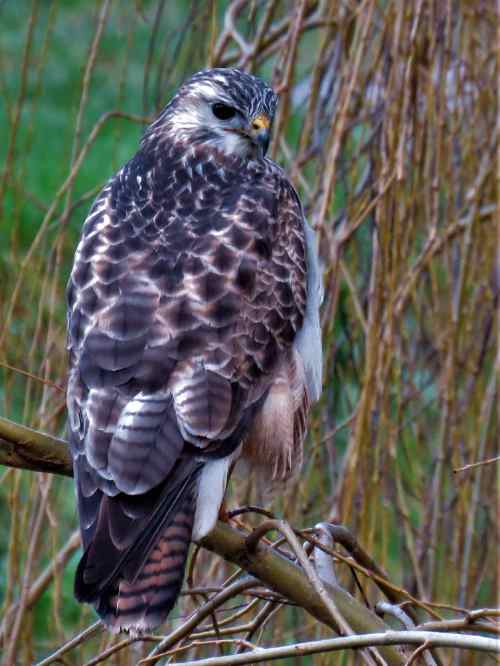 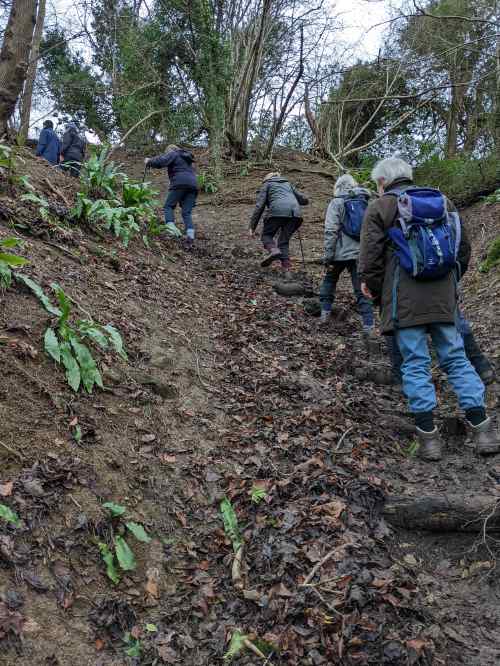 We made our way through the cemetery, noting the great variety of lichens on the gravestones. Alan and Marion Rayner have recorded over 100 species of lichens here. A single flower of Celandine was noted for Helena’s list and we also added Herb Robert (Geranium robertianum) and Smooth Hawk’s-beard (Crepis capillaris). No more flowers were seen until we returned to the civilisation of Bath streets!

We left the cemetery on a rather slippery path taking us up through the ancient oak and hazel coppice of Smallcombe Wood. At the top of the wood we emerged onto the meadow by Macaulay Buildings where there was a noisy flock of Jackdaws.

As we reached Widcombe Hill we were caught in a sudden shower and people quickly dispersed. Some of us walked down the road, noting flowering plants as we went. We finished the walk at 1pm at the Halfpenny Bridge, just in time to add a Cormorant making our tally of birds 25. Our botanists recorded 34 species in flower which were duly submitted to the BSBI to form part of the growing and interesting database which this project has generated over the last eleven years (see https://bsbi.org/new-year-plant-hunt). It is interesting to note that we saw seventeen of the top twenty plants recorded in flower during over 1250 New Year Plant surveys this year.