On a “soft“ day a select group of five braved the pot-holed track to Lower Woods. I outlined the recent history of this ancient woodland, which has been retrieved from dereliction to an active coppice area of 700 acres by the Gloucestershire Wildlife Trust.

We immediately found the fungus of the day, Poplar Scalycap (Pholiota populnea), growing from either end of a 3m long Poplar log at the edge of the car park! Apparently, it has only been recorded 61 times in the UK and the nearest site is in Oxfordshire. It was an RDB species until 2006. Not a bad start – and this was soon followed by the warden showing us Wrinkled Peach (Rhodotus palmatus) growing from the end of another log. This beautiful species seems to prefer Elm and became quite common at the height of the Dutch Elm disease but has now become rather rare. Also here were some unusually large specimens of Black Bulgar (Bulgaria inquinans) on an Oak log. 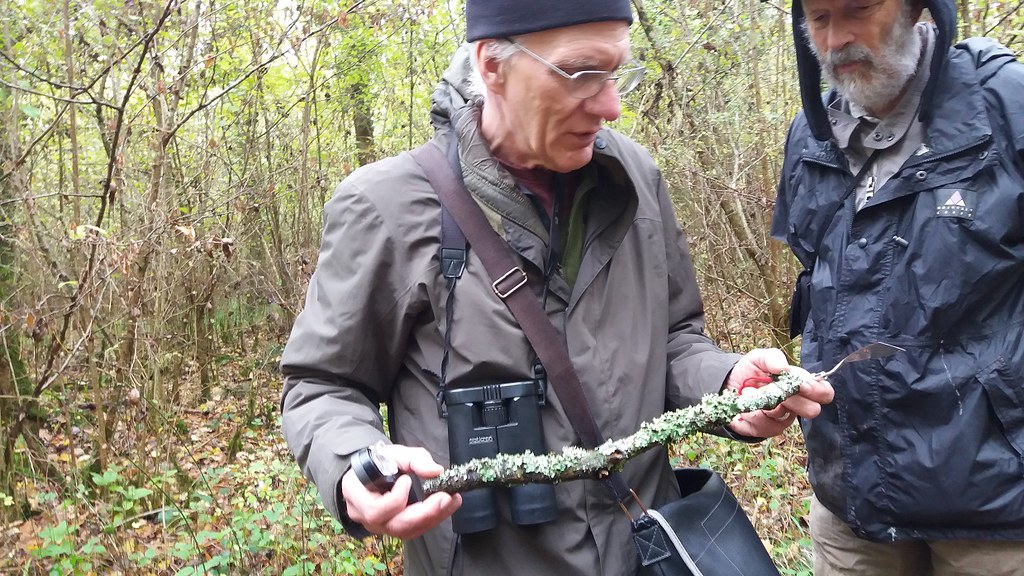 We were not expecting a great many fungi in mid-November but we did find quite a few late-fruiting species, including some spectacular Trooping Funnels (Clitocybe geotropa), abundant Silverleaf Fungus (Chondrostereum purpureum), some nice specimens of Oyster Mushroom (Pleurotus ostreatus) Jelly Rot (Phlebia tremellosa) , many Common Bonnets (Mycena galericulata) and, at the end of a birch log, the deadly Funeral Bell (Galerina marginata). The abundant leaf litter was colonised by many Snapping Bonnets (Mycena vitilis) and everyone listened carefully to the snapping sound as the resilient stalk was pulled apart.

Meanwhile, we admired the verdant growth of many bryophytes and observed the dramatic difference in the vegetation induced by the stage of coppice regrowth. Some remarkable very old coppice stools were noted that contrasted with the absence of aged standard trees following the clear-felling of trees in WWII. The promised mud was avoided by keeping to the paths and away from the Great Trench drove path (which in the past I have seen decorated with abandoned wellington boots).

Bird life was not prominent although we did hear Great Spotted Woodpeckers and Nuthatches and saw (and heard) some Fieldfares. Amazingly three hours had gone by in a very pleasant walk through well managed ancient woodland, richly decorated with autumn colours, profuse lichen growths, and abundant spindle berries, combining to yield the feeling of walking through an impressionist painting.