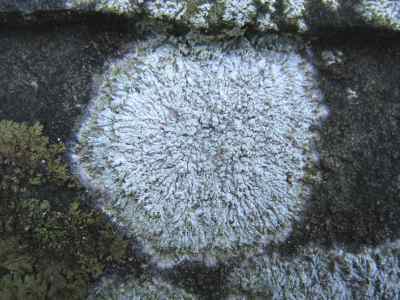 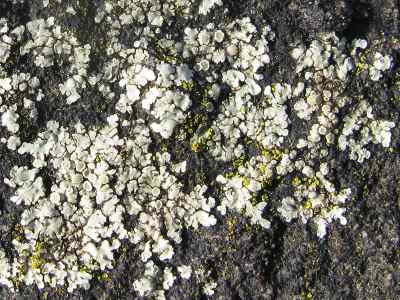 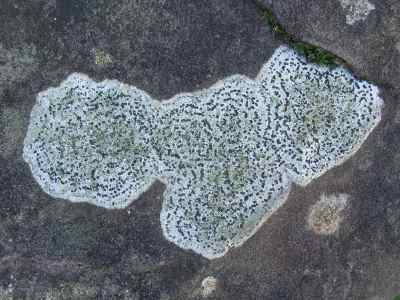 Six members joined the leader to have a close look at the lichens to be found growing in churchyards and cemeteries. Local buildings and walls are usually built from the range of limestones found in the area but gravestones, especially headstones and inscribed slaps, are of more durable stone, usually sandstone or granite. Hard stones are generally more acidic, so they can often have growing on them lichen species not naturally occurring in the area.

All lichens are fungi, mostly Ascomycetes, which live in symbiosis with a photosynthetic organism, usually one of the algae but sometimes a blue-green bacteria, often a species of Nostoc. Nostoc can often be found growing alongside lichens, and some of the algae involved can also survive without the aid of a fungal partner but very few of the lichenised fungi can survive on their own without their partner’s help.

Most lichens growing on stone are crustose, i.e. they form a crust which is firmly attached to the substrate right to the growing edge, which can either be formed of finger-like lobes or in some cases will consist predominantly of fungal hyphae and in this case that part of the lichen is called the prothallus, because later the main body of the lichen, the thallus, will replace it as the lichen spreads across the surface.

Ascomycetes are usually referred to as Cup Fungi because the fruiting bodies of many species are cup-shaped apothecia. Amongst the lichens there are two main types of apothecia, lecanorine (like Lecanora), with the fruiting body surrounded by a rim formed by the thallus, or lecideine (like Lecidea), and lacking such a rim. In the former case the rim is often a different colour to the fruiting body, in the latter case, if it has a rim, it is usually a similar colour to the centre or slightly paler.

There is a small group of lichens that are Flask Fungi and bear fruiting bodies that are flask-shaped perithecia with a minute hole (osteole), through which the spores are shot. Regardless of the colour of the thallus, these fruiting bodies are usually black, as they are in other flask fungi. Most of the lichens in this group are Verrucaria species and the fruiting bodies appear as very small pimples projecting from the lichen surface. In some cases the thallus itself is immersed in the rock (endolithic) and only the perithecia are visible. These tend to drop off with time leaving pock-marks in the rock as the only evidence that a lichen is (or was) present. 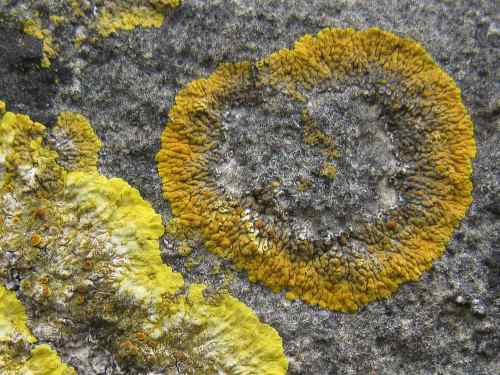 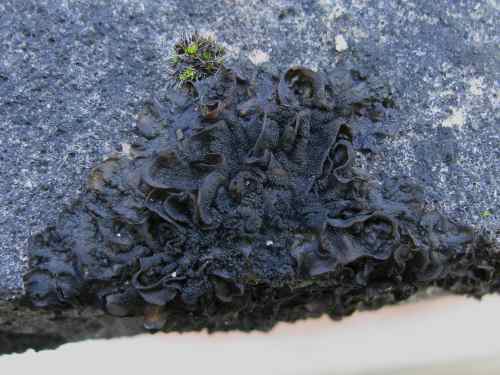 The first lichens to be studied were the bright orange and yellow species covering a retaining wall. Because of their colour they are the most likely to be spotted. There are two common species, Caloplaca aurantia and Caloplaca flavescens. They are rather similar but are easy to tell apart when growing close together. The former has broad yellowish lobes which are paler at the base, the latter has narrow orange-yellow lobes. The centre of these species often turns white and sometimes dies out. The wall also had many other species providing splashes of colour, mostly shades of grey or black, indicating the presence of many other species but attention was turned to a few common and easy to recognise lichens.

Sandstone slabs covered most of the chest tombs and on one was a large colony of Lecanora muralis, sometimes called the Chewing-gum Lichen because it often grows on pavements, where it looks very like freshly discarded chewing-gum. It consists of whitish lobes extending from a centre that usually has greenish or fawn coloured apothecia. Another lichen commonly found on pavements is Lecanora campestris, which has a grey thallus with deep red-brown apothecia. It looks more like chewing-gum that has been around long enough to become very grubby.

Rhizocarpon petraeum, a very distinctive species which produces white patches with concentric rings of black lecideine apothecia. Its relative, R.geographicum, was noticed on a tomb in 2020 but could not be refound. It has a buttercup-yellow thallus and is often called the Map Lichen.

One tomb was covered in lichens, mostly of two contrasting species. Melanelixia fuliginosa is one of the leafy (foliose) lichens, with lobes that ar not tightly attached to the surface. The whole plant is a khaki brown colour and the lobes are so glossy that in bright light they become iridescent and reflect a purplish colour. This species does not produce fruiting bodies but the centre of the thallus is covered in finger-like growths called isidia that can break off and form new plants. Growing with it was Physconia grisea, with a knobbly white thallus covered in granular soredia. Isidia and soredia provide infertile species with an alternative means of reproducing. Many of the older specimens of Physconia had stopped growing and were slowly crumbling away to form new plants. Younger specimens exhibited a prothallus consisting of translucent lobes in contrast to the frosty fingers extending behind them.

A large monument in the shade was colonised by mosses as well as lichens. Amongst the moss was Leptogium gelatinosum, one of the species that has Nostoc, a blue-green bacteria, as its photosynthetic partner. It is at its best early in the year so was not very easy to make out amongst the tufts of moss, but Collema auriforme, also associated with Nostoc, grows directly on the stone and its rubbery ear-like lobes are covered in spherical isidia that give it a most unusual appearance. 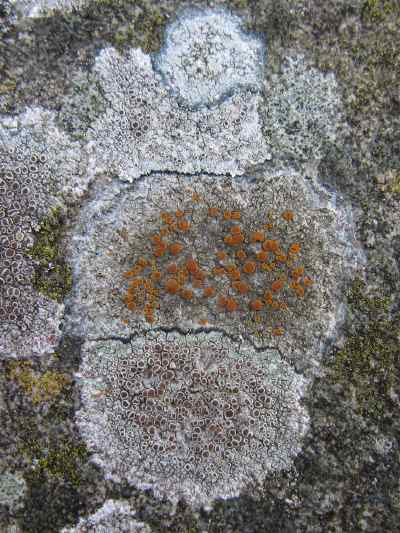 The northern end of the cemetery has numerous slab tombs and chest tombs and many of these were covered in lichens, including Caloplaca crenularia, one of the leader’s favourites, which stood out from the rest because of its fox-red apothecia contrasting strongly with a cracked grey thallus. There was not time to explore lichens on any of the trees so these will be explored on another occasion.

To find out more about lichens, Frank Dobson’s Lichens, an illustrated guide to British and Irish species, is recommended. The internet is also a useful source of information and illustrations.