Langford Lakes Wiltshire Wildlife Trust Reserve lies on the River Wylye flood plane, some 12 miles north west of Salisbury. Fifteen of us met at the reserve Car Park. From here, we followed a permissive path across a sheep grazed meadow, then followed a chalk stream into reserve proper.  We joined the path along the south side Long Lake heading east. Blackbird, Wren, Robin, Chiffchaff, Chaffinch, Blackcaps and Garden Warbler sang from the cover of bushes and trees along the path. We stopped to view the lake from South Hide. Birds seen on the lake included; Canada Geese, Gadwall, Mute Swans, Great Crested Grebes, Coot, Tufted ducks and a most interesting male hybrid Pochard / Tufted Duck.

A Common Sandpiper was just visible on an artificial nesting raft, out on the lake. Beyond the hide, we came across the first of several Cetti’s Warblers. At east end of Long Lake there is a blind from which another Common Sandpiper was seen. A Sedge Warbler was seen singing in bushes near by. Beyond lay a dry, open area; formally a working flood meadow, where sluice controlled flooding had been practiced. Two flooded scrapes have been created here to encourage wading birds. A Muntjac Deer broke cover and ran off into the distance. Linnets, Whitethroats, a Reed Bunting were seen along the hedge line. A Red Kite, Buzzards and Cormorant flew in the distance. A Kestrel flew close overhead.

At the east end of the reserve is a reed bed, created to process sewage from Hanging Langford; habitat for Reed Warblers heard singing there. Orange Tip Butterflies fluttered nearby. Beyond is another hide, constructed to overlook the two purpose made scrapes. Birds seen from this hide; Grey Heron, Lapwings, Mallard, Gadwall, a second year Great Black Backed Gull, Lesser Black Baked Gulls, Herring Gulls, Black headed Gulls, Swallows, Sand Martins and briefly a Kingfisher which flew across the scrape.

We returned to our cars westward, following the track along the north side of Long Lake, and south of the other lakes on the reserve. The lakes to the north are bounded by tall trees, mainly poplars, providing a different habitat. Additional species seen included; Long Tailed, Great and Blue Tits, Jackdaws, Magpies, nesting Rooks and a Carrion Crow. Following packed lunch at the car park we set off for Battlesbury Hill near Warminster and bounding the Salisbury Plane Army Ranges.

Having driven through the military camp along the Imber Road, we parked our cars near the entrance to Battlesbury Barracks. Whitethroats sang as we crossed a flat meadow to the bottom of the hill. By this time we had lost the morning sunshine and warmth. Given the conditions it was not worth lingering at the scrubby butterfly site just beyond the entrance stile and so began our steady accent up to the Iron Age embankments at the top. On the way up  came across a sad looking Slow Worm with missing tail.

In addition a few Goldfinches and Linnets, we saw Skylarks and Meadow Pipits typical of this chalk grassland. Roe Deer were seen on the army ranges below as we reached the hilltop. 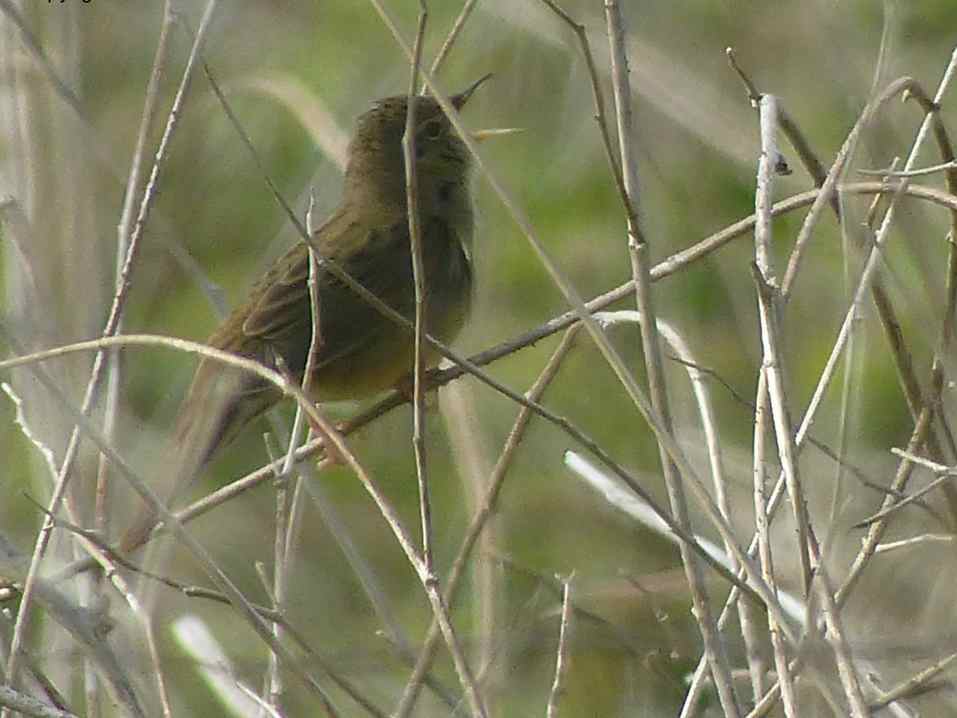 As we started to follow a ridge top path around the hill, there came the reeling sound of Grasshopper Warbler. It was Lucy Starling who located the bird and with patience most of us were able to see this elusive bird.  As this little brown warbler was only there until late morning the next day, we were extremely lucky to see it sing. We continued along the hilltop path but were were assailed by a cold wind and an advancing rainstorm, which made a quick return to our cars a priority. Overall it was a good day out, with 47 bird species seen over the two sites.