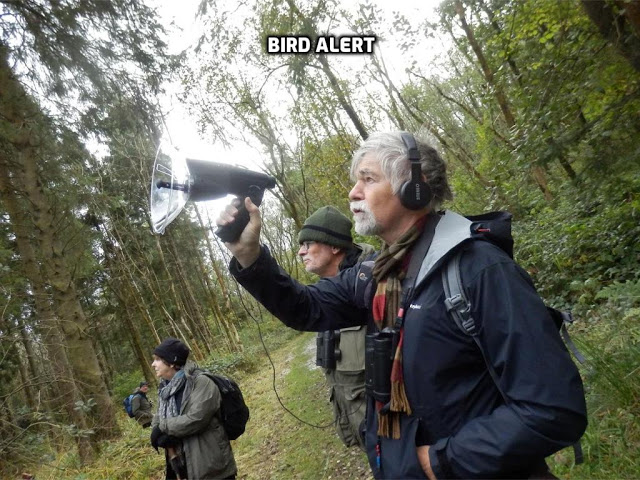 A dozen of us gathered for this meeting on what was to turn out to be a mostly dry, bright Autumn day with sunlight sifting down at times through the tree canopy to dapple the ground below. From the reserve entrance we made our way down to the petrifying stream marked by signpost 1, then turned right up into the conifer, birch, ash and sallow woods, where we quickly found and demonstrated a variety of common fungi and bryophytes while the two Toms, Pinkheard and Rogers, went on the listen-out for bird song, aided by a receiver disc and amplifier that attracted a puzzled look from a passing dog-walker.

We continued down to the large clearing we had chosen as our lunch spot, enjoying the abundant growths of Big Shaggy-moss (Rhytidiadelphus triquetrus) and Common Tamarisk-moss (Thuidium tamarascinum) along the way, but disturbed also by the devastating amount of Ash die-back disease in evidence. As we ate our lunch, seated on a circle of wooden benches, Tom Pinckheard used his bird-call app to summon a pair of Goldcrests down from nearby trees into our midst. Shortly afterwards we had a good view of Great Spotted Woodpecker probing a nearby dead ash tree.

As we set off after lunch, Alan pointed out the Common Rustgill fungus (Gymnopilus penetrans) growing on a conifer stump at the centre of the circle, and then a group of Coconut Milkcaps (Lactarius glyciosmus) in mycorrhizal partnership with a nearby birch tree.

Next we descended down the steps to the bridge over the stream through Home Wood, which was in full flow after recent heavy rainfall, then climbed up past the waterfall to the Keeper’s Cottage. A short riverside walk along from there took us past a rock face luxuriantly covered in large bryophytes, including the beautiful Greater Featherwort (Plagiochila asplenioides) and superficially similar Crisped Neckera (Neckera crispa).
We then retraced our steps back past our lunch spot and took the permissive path down towards the beautiful stone bridge where two streams confluence into the Mells river.

On the way down we noted a small Fly Agaric (Amanita muscaria) and a group of Birch Webcaps (Cortinarius triumphans). On trees down by the bridge we found mossy coatings of Blunt Feather-moss (Homalia trichomanoides) and Larger Mouse-tail Moss (Isothecium myosuroides), amongst others, and on one of these trees we found a tiny, white, scaly agaric, with pinhead sized caps, which turned out to be the seldom-recorded Mycena corynephora. 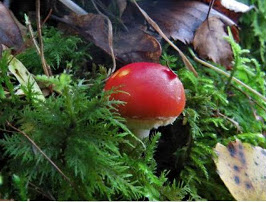 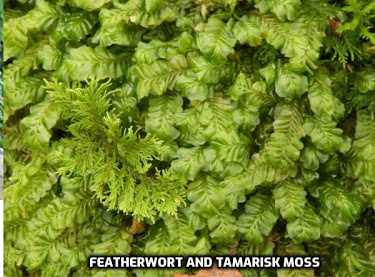 The time now came for us to return to the reserve entrance. As we did so, Alan’s attention was attracted by a particularly large specimen of Clouded Funnel (Clitocybe nebularis). As he reached it he noticed hiding beneath its cover, an Elastic Saddle (Helvella elastica) – an unusual find to mark almost the end of a very enjoyable meeting. But, the very last find – on the wooden post at the reserve entrance, two crusts of the wet rot fungus, Coniophora puteans, took the form of a perfect exclamation mark!