This was advertised to members in early May as an additional meeting following the rescheduling of my Ham Wall Bird Song field workshop (2) from Saturday 8 May to Friday 7 May due to adverse weather forecast for that weekend.

As Carole C and I drove into the car park, just behind Terry D with John G, and simultaneously got out of the car, we all immediately heard a Cuckoo which put in a very brief appearance just over the hedge. I then mentioned my astonishment at the sight of what looked like a full car park already at 9am! The thought that there might be a “twitch” on for a rare bird went through my mind but replaced with the thought that it was perfect weather conditions for nature watching at this wonderful reserve and it was still school half-term holiday period etc. 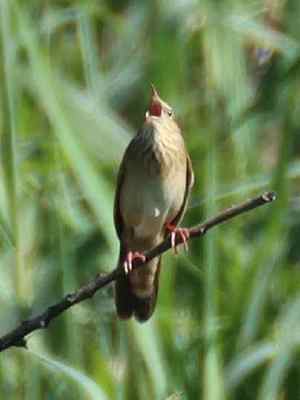 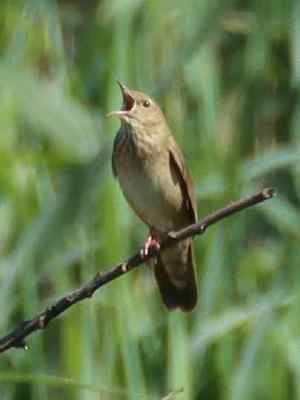 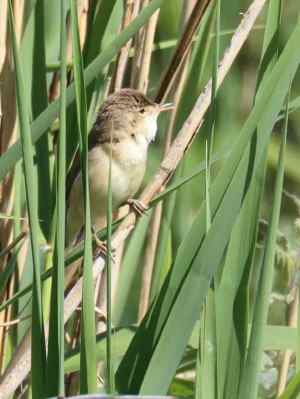 I soon learned that my first thought was correct; a River Warbler was present in the reed beds off the grass path leading towards the Avalon Hide. It was showing well and singing a birder told me; he had arrived on site about 6am. The bird had arrived on Friday, the previous day, and that was why the site was busy and not absolutely heaving with birders as many would have got the bird on 4th – this was a bit of a “mega” species as I read later, the first mainland sighting for around a decade and a UK tick for me and for Terry D! So, when all 11 Nats members were gathered at 9.30am, I showed the illustration in my Collins field guide and said I would be walking directly to the site of the bird without delay or any stopping, even to look at a Bittern! As I walked along, I thought I could hear Common Cranes calling in the far distance and when I later took note of the board reporting the day’s species thus far, three Cranes got a mention (Geoff H and Felicity G saw them but they were some way off).

Birders were departing the stretch of grass track as we approached the crowd of about 50 and all was calm and quiet, everyone enjoying the experience and of course cameras were clicking and videos being taken. Everyone was getting telescope views and noting the distinct undertail pattern as can be seen in Ned Garnett’s photos – compare the slightly larger River Warbler with a Reed Warbler which sometimes popped up nearby. The song of the River Warbler is described as being like a powerful sewing machine. Of course, the song is completely different from Reed Warbler. So, number 410 species recorded in the UK for me, my first “tick” since 2013. 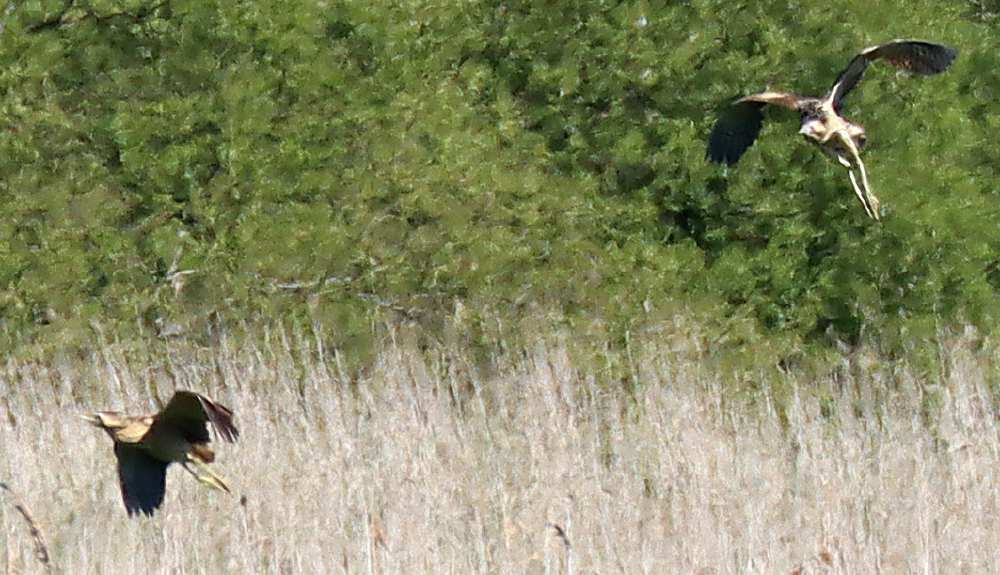 After some 30 minutes, we moved away to give room to other birders arriving and headed off in a very happy mood to walk around Waltons where we had the place to ourselves and all the creatures living there which was truly delightful and very rewarding. We did stop first at VP1 which was being reported as the best spot for Bittern viewing and so it was for us – excellent views of a pair in flight low over the reeds and then dropping in. Likewise, good views of Marsh Harriers (photo top of page © Ned Garnett).

Common Whitethroats with young fledglings calling in the nearby bushes and a most obliging Sedge Warbler singing with its usual gusto, vivacity and mimicry including in song-flight. So, still lots to enjoy listening to including the loud and rather startling outbursts from Cetti’s Warbler and the more subdued twitters from other songsters including Reed Buntings and Willow Warblers but song generally on the wane somewhat at this time in the breeding season. I think we all heard a few croaks from the Iberian Pool Frogs among the bird songs and calls and humming of insects. 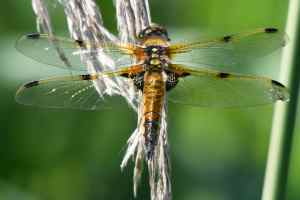 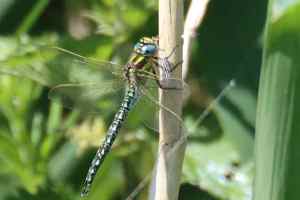 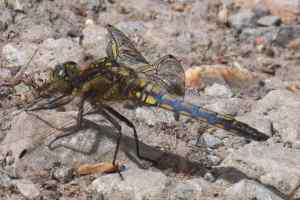 Indeed, It was so good to see so much more insect life on our circular walk following a spell of warmer and sunnier weather. So many Four-spotted Chaser and reasonable numbers of Hairy Dragonfly, among the hundreds of Variable, Common Blue, Azure, Blue-tailed damselflies and a handful of male Banded Demoiselle (I don’t think I actually recall seeing a Large Red Damselfly but they must have been about). Ned G managed an excellent shot of a male Black-tailed Skimmer, a species that likes to land of rough hard bare ground. We saw several Red Admiral and a few Speckled Wood butterflies and Terry D identified an Angle Shades moth resting in the grass. After a 1pm lunch at the picnic tables by the pond, we noticed many Swallows swooping about no doubt hunting insects and we wondered where any Hobby had got to – well, we soon found out as on our return to our cars, two Hobby swept into view, one chasing after a Swallow!

We did pop across to Shapwick Heath as far as the turning to Noah’s Hide and added Red-eyed Damselfly and Scarce Chaser to our Odonata list of species and we heard two booming Bittern and had some good views of Great White Egret (one Little Egret seen at Ham Wall and Grey Heron). Our visit ended around 3pm as more hopeful birders were arriving from afar to see and hear the River Warbler.

Carole and I returned to Bath via Tadham and Tealham Moor, all part of the Avalon Marshes complex of habitats where, on Thursday 4th, I had found Cattle Egrets among cattle close to the road and also male Yellow Wagtails among Lapwing. Good fortune was with us and the species were in the same locations as on Thursday – the gods were really smiling on us to end what was a truly astonishing day full of the joys of the natural world.