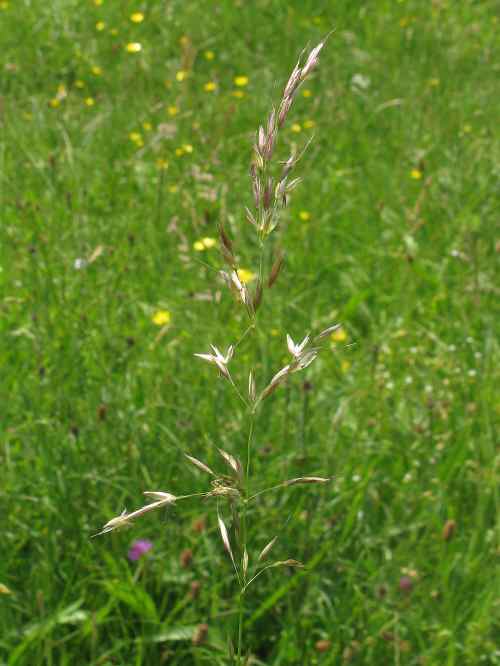 The meeting was billed as a workshop, but as only one member joined the leader it was more of a tutorial. Wild flower enthusiasts usually shy away from grasses but once a good hand lens and guide book are obtained it becomes easier to at least identify grasses to the correct genus. One of the problems is that the parts of the plant that need to be examined are small and not particularly colourful.

For the benefit of those who do not feel confident enough to tackle grasses, there follows a basic introduction.

With the exception of the stamens, all the floral parts are paired rather than in threes as they are in most other monocots. Grass flowers are grouped together on small spikes, but as these spikes can themselves be arranged in spikes, these are referred to as spikelets. Each spikelet has two green or papery bracts at the base. These are called glumes. One emerges from the stem a little lower than the other, so they are referred to as the lower and upper glume. Their shape and relative length is often useful in identifying individual species. The rest of the spikelet consists of the flowers which appear alternately on either side of the stem.

Each flower is enclosed within two more, green or papery structures, the outer one is called the lemma, the inner one the palea. Again, differences between them can help identify species. The lemma may have a spine (awn) emerging from its back or from the tip. The flower itself consists of an ovary that will eventually include a single seed, or grain. On top it has a two-lobed feather stigma, to catch the pollen. From below the ovary, three stamens emerge. Each has a long stalk (filament) on which is the pollen bearing anther. These are not always visible because grass flowers only open at a particular time of day and the time varies from species to species. The flowers open by means of very small structures at the base of the flower, called lodicules. They swell up at the appropriate time and the flower opens and the stamens dangle out, allowing the pollen to be blown away on the wind.

The stems are in structure similar to bamboo canes, bamboos also being grasses. They are hollow for most of their length except at a series of nodes, at which leaves usually emerge. The lower part of the leaf sheaths the stem but the upper part sticks out and is referred to as the blade. Where they join there is often a papery extension of the sheath. This is called a ligule, and its shape can also be used to distinguish closely related species. The non-flowering stems, called tillers are either short and form a tuft or cushion around the flowering stems, or creep above ground (stoloniferous) or under it (rhizomatous). Botanists brave enough to identify grasses when they are not flowering will need to examine these.

Oats have flowers held in branched panicles and there are a number of native grasses with flowers similarly arranged so they are called Oat-grasses. The False Oat (illustrated) is a large weedy species. It was seen in flower, as were two other oat-grasses: the Hairy Oat-grass and Meadow Oat-grass. These have shiny papery flowers which makes them stand out from the surrounding greenery. Yellow Oat-grass has glistening yellow flowers but these appear rather later. Bromes flower quite early too and their flowers are also held in panicles but each spikelet is reminiscent of a head of Barley. Several of the bromes are closely related and often hybridise so identification is not always possible. Sweet Vernal Grass is one of the first to flower and its scruffy spikes also stand out and when in quantity tend to make a meadow look quite brown.

Meadow Barley and Wall Barley have spikes of flowers very much like miniatures of the cultivated species but they flower later in the year. Ryegrass was in flower, but despite its name, the flower spikes do not look much like Rye. People often confuse Couch and Ryegrass but their spikelets are arranged quite differently. If you look at Ryegrass when it is in flower the spike appears flat because the spikelets are in the same plane as the overall spike. Couch spikelets are arranged at right angles making the spike look more three-dimensional.

Several grasses have flower spikes resembling animals’ tails. Those of Meadow Foxtail are soft to the touch but Timothy, or Cat’s-tail, looks like the tail of an angry cat and is rough to the touch. Crested Dog’s-tail has spikelets that tend to be on one side of the spike, rather like the hairs on a dog’s tail.

There are numerous Meadow-grasses and Fescues which also have a distinctive appearance but because the spikelets are very small they take longer to learn. However, almost everyone is familiar with Quaking Grass. It is so well known that it has earned a number of other names like Totter Grass and, Wigwams. I suspect members can provide a few more names.