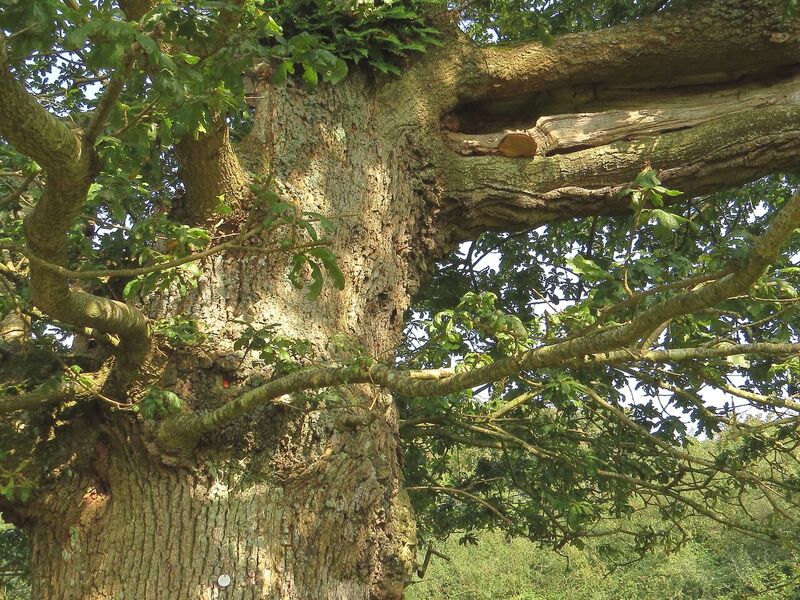 An enthusiastic group of a dozen naturalists met at Folly Farm in glorious autumn weather, for a day spent studying a wide range of plants, fungi and lichens. We started by looking at lichens on Ash and Oak bark, Spangle Galls on Oak and the amazing pure white sputnik-like egg sacs of a small spider, Paidiscura pallens on the underside of Oak leaves. Walking through Folly Wood, members were introduced to some common mosses, including an explanation of alteration of generations and the difference between acrocarpous mosses (upright plants bearing their capsules at the apex of shoots) and pleurocarpous mosses (sprawling plants bearing capsules along the length of the shoot).

The main focus of this autumnal walk was fungi, of which we saw a good range. We soon encountered Blushing Rosette (Abortiporus biennis), with its rose-like fruit-body, and Snapping Bonnet (Mycena vitilis), with its stem which breaks with an audible “snap”. Later we found other species in this genus: the Burgundydrop Bonnet (Mycena haematopus) which weeps a dark red latex when broken and the Grooved Bonnet (Mycena polygramma) with longitudinal striations on its stem. A number of bracket fungi were seen, including the Hairy Curtain Crust (Stereum hirsutum), Trametes ochracea, the Peeling Oysterling (Crepidotus mollis) and an impressive Beefsteak Fungus (Fistulina hepatica) on a splendid oak. This tree also supported the Bleeding Oak Crust (Stereum gausapatum) and Peniophora quercina, both crustose species which grow on live wood.

Perhaps the most exciting mycological find was a colony of false truffles (Melanogaster broomeianus) beneath a Beech tree, closely attended by bright yellow and grey- brown baby fruit bodies of Rooting Bolete (Boletus radicans). Other species seen included the Willow Shield (Pluteus salicinus) and Deer Shield (Pluteus cervinus), the extremely variable Deceiver (Laccaria laccata), a tiny Orange Mosscap (Rickenella fibula), the White Knight (Tricholoma album) and the poisonous White Fibrecap (Inocybe geophylla). In woodland we found the Grey Milkcap (Lactarius vietus) and marvelled at the quantity of milk emerging from the gills when damaged. Along a log we saw a host of Pale Brittlestems (Psathyrella candolleana), whilst on dung in the grassland we found the Petticoat Mottlegill (Panaeolus papillionaceus), the delicate little Hare’s-foot Inkcap (Coprinella lagopus) and the Fairy Inkcap (Coprinellus disseminatus). We found three different slime moulds, one a brilliant yellow, another a group of small grey spheres.

Members discussed the shortage of butterflies this year. During the day we saw Speckled Wood, Red Admiral and a smart Comma; however the highlight of the whole day was a Clouded Yellow, the first of the year for many. We also saw a Large Yellow-underwing and a Pale Emerald moth.

The whole day was filled with the study and appreciation of diverse natural history, made richer by the varied interests of the members present. All agreed that it had been an interesting and enjoyable day, enhanced by the glorious autumn sunshine.