Six of us gathered outside the cemetery gates on a calm but chilly morning around 5.45am, having delighted in the huge full moon before it dipped out of sight behind the trees of Alexandra Park. Blackbirds had been singing their delightful mix of fluty whistles and warbles since around 5am, along with many Robins. Pulteney Road was so devoid of traffic around 5.20am that I could easily hear a Goldcrest near the bottom of Bathwick Hill on my walk to the venue.

The harsh low – pitched calls of “Frank” were heard at intervals from the nearby small heronry (Frank an old name for a Grey Heron) and the Ravens were very noisy at their nest at the bottom of the cemetery. Blackbird, Wren and Robin were the most persistent songsters and Wren song also pretty constant, as was some Great Spotted Woodpecker drumming at the start of the meeting. 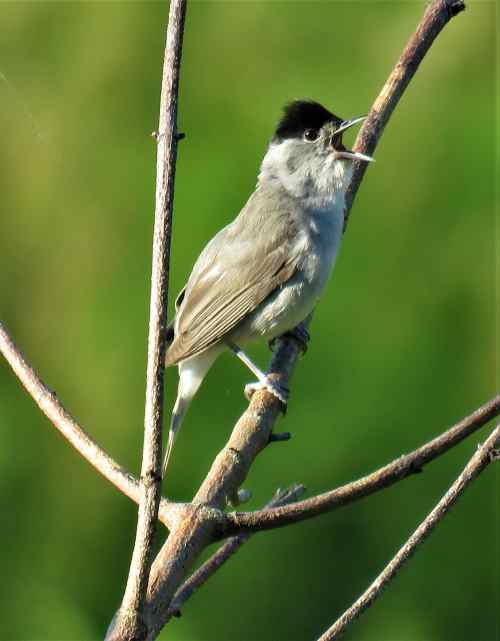 Great Tit and Coal Tit with their rather monotonous typical disyllabic songs were other early birds getting going.

A Goldcrest then started its quiet, very high frequency ditty from one of the many Yew trees, conveniently singing directly above our heads.

By now, about 6.10am, the Wood Pigeons had joined in the throng, also a Dunnock, briefly, and finally, a Blackcap, near the top of the cemetery. He was, as is fairly typical of this “March Nightingale” (as named by the poet John Clare) a hesitant singer, delivering his first few fluty and rich notes in a rather stuttering and stammering fashion, before getting into his stride and finishing with a confident and louder finale.

We walked over to the bottom entrance gate to Prior Park NT Gardens via Church Street and up The Dell to Church Road and along the rough track where we could view the Palladian Bridge and the current on-going dam restorations. We had distant views of a Red Fox wandering around the works in progress, having been equally surprised by another mammal, namely a Muntjac Deer about 10 minutes earlier wandering the lawns of Widcombe House.

A pair of Stock Dove engaged in arial courtship but failed to give us their two-note cooing “song”. One Nuthatch called loud and clear on a couple of occasions on our walk-about and only one Song Thrush eventually piped up from within the National Trust gardens at about 7.10am along with a nearby Chiffchaff. Kestrel, Jay and Buzzard added to our seen but not heard list.

I was grateful for the added presence, independently, of Tom Pinckheard who kindly took the photograph (top of the page) of us all intently listening to a Blackcap.