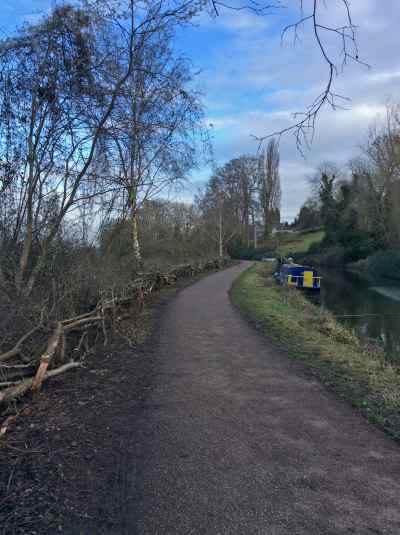 In accordance with Covid-19 regulations, a maximum of 5 members could join the Leader. 4 members joined me by the Beckford Road on a cold and grey early afternoon for a stroll along the canal towpath to Mill Lane (we avoided the riverside fields to Mill Lane due to flood water and excessive muddy areas). We rested awhile in the Batheaston walled garden before walking along to the Bathford round-about under the bypass and following the footpath beside the railway line to Bathampton Home Farm field, then crossing the railway line at Bathampton junction and back along Tyning Road to re-join the towpath. The meeting took about three hours at a slow pace with stops. The later start time to avoid early morning ice may have impacted on what birds were seen/heard but not significantly.

We had sightings of Raven and Common Buzzard at fairly close quarters. The Raven perched briefly in a tall beech and “kronked” a couple of times before flying off and the Buzzard was seen flying low over the canal. Usual Mallard, Mute Swan and Moorhen present, along with Wood Pigeon, Jackdaw and Carrion Crow. Wren, Robin, Blackbird, Great, Blue, and Long-Tailed Tit and one Greenfinch and one Dunnock had been recorded by the time we arrived at Mill Lane. There was still water lying in the field near the cycle/footbridge at Batheaston and this had attracted Black-Headed Gulls, one Common Gull, Canada Geese and a few Pied Wagtails. Penny W was fortunate to be looking down river at the right time to glimpse a Kingfisher flying by. It was good to see two Song Thrush and we heard only one Chaffinch calling as we sat in the walled garden.

A Grey Heron sat crouched down beyond the riverbank in the AWT Oxbow reserve as we walked towards Bathford and we found a small flock of Goldfinch among the Teasels in the bankside vegetation. As expected, there were a number of Cormorant sitting on their favourite pylon! Fortunately, there was some flood water close to the footpath across Bathampton Home Farm field by the first pylon in which we found several Pied Wagtails and Meadow Pipits. Our final stop was opposite the school by Station Road opposite the sports field at Bathampton. Here there was a sizable flock of Redwing feeding in the grass. Then what luck when the birds took off and into view, not far above head height, flew a male Sparrowhawk. He sat conveniently on top of a fir tree by the school for us to clearly note his rufous tinged chest and slate grey upperparts.