We were still restricted to a group of six when we met on the canal aqueduct on a fine sunny morning, where we were joined by Joe Middleton of the Woodland Trust and James Crawford, the voluntary warden for the new nature reserve. Joe explained how Avoncliff Wood and its adjacent fields had been acquired by the Woodland Trust in 2018 after £340,000 had been raised by public subscription for the purchase. The wood, an ancient woodland of traditional oak/ash coppice covering nearly 20 hectares (48 acres), had been left unmanaged for over 100 years. The ash is suffering extensively from die-back and because of the danger from falling branches the wood itself will remain closed to the public.

To get to the wood from the riverside path we crossed one of the adjacent fields. Ecological surveys had shown that the field was not floristically rich so the Trust had embarked on planting of over 4000 native trees, including oak, wild cherry, field maple, hornbeam, birch and small leaved lime. A wide strip has been left to allow natural regeneration alongside the wood which now provides a hunting ground for barn owls. A Green Woodpecker was feeding in the field and a Great Spotted Woodpecker was drumming in the wood. Blackcaps and Chiffchaffs were singing.

Entering the wood we were struck by the continuous swathe of Wild Garlic that seemed to extend as far as the eye could see. But in many places Herb Paris (Paris quadrifolia) was abundant and we also found Yellow Archangel, and Wood Anemone, all of which are indicators of ancient woodland. Nursery web spiders (Pisaura mirabilis) were noted. Throughout the wood the ground was covered in fallen branches, many of which were covered in mosses which also grew in profusion on the base of long established ash coppice. Some ancient coppice stools could be 4-500 years old. Many have large cavities and there is much dead and dying wood. We were told that 11 different species of bat have been recorded from the wood.

Birds included Wren, Blackbird, both Song and Mistle Thrushes, Nuthatch, Goldcrest, Woodpigeon, Crow, Pheasant and Buzzard (which nest in the wood). We followed an overgrown ride dating from the time when timber was extracted. In the adjacent field the Trust has planted a small apple orchard. A hobby flew over as we came back down, a great treat, and a couple of swallows, a house martin and a noisy whitethroat in a bramble patch added to our tally of birds. These were the first of the year for some of us.

We witnessed a new beginning in the management of this piece of woodland, in which looking after nature is the primary objective. 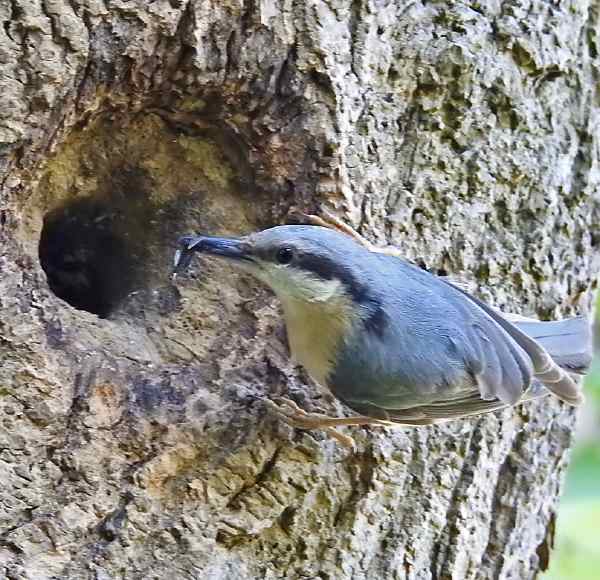 David Goode photographed this nuthatch at its nest on Beechen Cliff, Bath. The hole was a great spotted woodpecker nest site that has been modified by the nuthatch as described in all the books.