A group of 17 of us gathered in the National Trust car park near Alfred’s Tower on what was to turn out to be a very pleasant, mild and often sunlit October day, with much to see and appreciate in varied habitats very different from what we’re used to around Bath.

Our first port of call along the track leading down from the car park entrance was a series of log piles where, during our recce ten days previously, Marion and I had come across a frilly brown and white bracket fungus that I had only found once before – in Jersey, in April – but not been able to identify.

After following some false trails, this eventually proved to be Laxitextum bicolor, a species that until recent years had been very seldom recorded in Britain. This is apparently the first record for south-west England. We found plenty of other fungi adorning the logs: Slimy Scalycaps, Turkeytails, Hairy Curtain Crusts, Bleeding Oak Crusts, Purple Jellydiscs etc, but, no Laxitextum. Puzzled, I returned a short while later and did manage to find some patches of the fungus, but not where we’d previously seen it growing abundantly. Apparently the log pile where we’d seen it had been removed following our recce! Such is the way of managed woodlands. 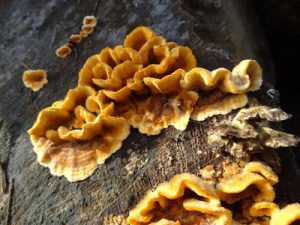 No matter, our party continued downhill before turning east along the path towards Convent Bottom. As we did so, Lucy Delve alerted us to the chattering parties of up to twenty Crossbills that were to accompany us for much of the day, at one stage settling in the top of a tree for all of us to see. Other notable species included Bullfinch, Redwing, Raven, Buzzard, Marsh Tit (heard), Great Spotted Woodpecker, Siskin, and a single flyover Redpoll.

As we made our way along the path Marion and I pointed out a variety of the bryophytes, lichens and fungi that could be found in the interwoven dry and wet habitats formed as water percolates and spills from greensand ridges into soggy valley bottoms.

At Convent Bottom, our attention was briefly diverted by the mysterious water wheel in the woods, which Terry Doman explained to us in his inimitable way, as water spilled from a pipe onto its rotating receptive surfaces. 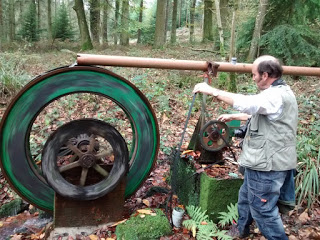 Terry Doman at the waterwheel

Then we ventured down into the beautiful wet woodland habitat, abounding with mossy textures, and encountered the very lovely fluffy flow-forms of the Handsome Woollywort (Trichocolea tomentella), a liverwort with extremely divided leaves. All that now remained for us was to climb slowly back uphill after a richly varied and rewarding day. 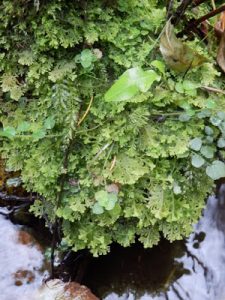 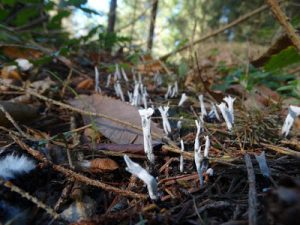 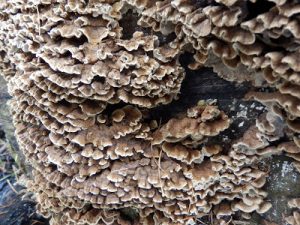